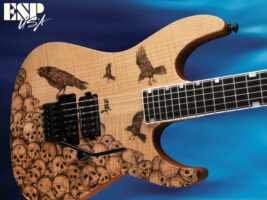 Guitar manufacturer ESP has partnered with NFT developer Fanaply to create a series of limited-edition digital artworks, based on its Pyrograph electric guitars.

The series consists of digital versions of the M-I FR-DLX Skulls & Crows, M-II Hardtail Great Wave and TE-II Hardtail Snake Skin. All of the real-life instruments feature hand-burned artwork by artist Duno Muradian.
ESP President and CEO Matt Masciandaro said in a statement: “Since the start of ESP, our customers have included many musicians who appreciate collecting rare instruments and music memorabilia.
“The Pyrograph NFTs are perfect for anyone who wants to have verifiable ownership of collectible art that’s based on some of our most intricate guitar designs ever.”
Grant Dexter, co-founder and CEO of Fanaply, added: “We’re thrilled to be bringing limited-edition digital assets to ESP’s fans and customers. NFTs offer innovative companies like ESP a new and creative outlet in which to offer fans additional visions of their creative minds while offering fans true digital ownership for the first time.
“We’re so excited to celebrate these amazing guitar designs in digital form. Our NFTs are built for real music fans, and they are inclusive and environmentally friendly!”
Fanaply describes its speciality as “eco-friendly NFTs from the biggest names in sports, music and entertainment.” Some NFTs are described as inefficient or even harmful to the environment due to the huge energy cost of their creation – for instance, one transaction of an Ethereum NFT uses as much energy as the average US household does in a day and a half.
However, that’s not the case here, apparently, as Fanaply has created some proprietary tech to mitigate the impact of transactions and partnered with Offsetra to offset its carbon. Offsetra explains on its website: “Fanaply has built a system that dramatically reduces the environmental impact of NFT transactions using a proprietary ‘managed wallet’ system that significantly reduces the number of on-chain transactions they generate.
“This eliminates the majority of the traffic they send to the blockchain, hence reducing gas fees and energy consumption. This is unlike standard NFT systems that leverage the blockchain for every single transaction, which creates bloat, traffic congestion, high fees, and ultimately far greater energy consumption.
“Fanaply wanted to go one step further and completely eliminate any residual emissions from their activity on the blockchain. For this reason, they are thrilled to be partnering with Offsetra to ensure their entire NFT operation is 100 per cent carbon neutral both now and in the future.”
The NFTs, which are digitally unique thanks to blockchain technology, are limited to 30 copies of each model. Every NFT will set you back $100.
You can see the ESP NFTs over at fanaply.com.
The post ESP launches run of $100 guitar NFTs appeared first on Guitar.com | All Things Guitar.