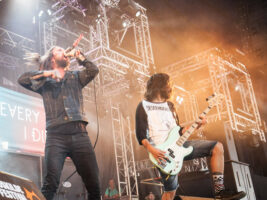 US metalcore band Every Time I Die have called it quits, after more than 20 years together.

READ MORE: “The day it’s hard for us to write music is the day it’s done”: Every Time I Die’s Andy Williams on balancing music and… Pro Wrestling?

The disbandment seemingly stems from a disagreement between singer Keith Buckley and the rest of the group’s final lineup: Andy Williams, Jordan Buckley, Stephen Micciche and Clayton ‘Goose’ Holyoak.
Last night, all members besides Keith Buckley shared on Twitter that “Andy, Jordan, Steve and Goose’s last show with Every Time I Die was on 11 December 20221. While we hoped to come to an agreed upon legal statement that outlined the truth, we were informed today of something planned to be released not mutually agreed upon that consists of inaccuracies and copntrols a narrative to benefit one.

“There has been no direct communication with Keith, because it’s either impossible for direct communication with him solely or we’ve been cut off to any and all communication by himself.
“Every time I Die was these five members, and we were never budding or accepting any changes. Simply, there is zero truth about the band continuing on with a new singer.
“Lastly, we wouldn’t be where we are today without every single person that’s backed the band in any and all ways. While we’re extremely disappointed in how this was played out online in front of you, your support and the memories we have because of you will always be cherished.”’
A few hours later, singer Keith Buckley shared a cease-and-desist letter addressed to him, apparently from a lawyer representing the other band members. It asks that Buckley “immediately cease and desist all usage of the band name, logoo, or other intellectual property until there is a formal signed separation agreement between the parties which authorises you to do so.”

Every Time I Die’s social media accounts have been closed.
The band’s last album, Radical, was released in 2021. It arrived to critical acclaim, and was named Kerrang!’s album of the year.
The post Every Time I Die disband, seemingly in midst of legal dispute with singer Keith Buckley appeared first on Guitar.com | All Things Guitar.