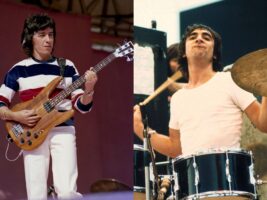 Former Rolling Stones bassist Bill Wyman has described what it was like to be friends with The Who’s Keith Moon – sharing anecdotes of the late drummer’s ‘mad’ behaviour.

READ MORE: Bill Wyman On How Rolling Stones Owe Their Success To Brian Jones: “I Don’t Care What You Say About Mick And Keith”

It will come as no surprise that being part of one of the most successful rock and roll groups of all time can lead to some pretty interesting anecdotes. Well, in a new interview, Bill Wyman has proved exactly that, sharing details on what it was like to be close friends with Keith Moon.
Speaking with Classic Rock yesterday (24 October), the ex-Rolling Stone member recalled some of his personal experiences with iconic artists including Jimi Hendrix, Peter Frampton, George Harrison and Jeff Beck.
However, it was his recollection of Keith Moon that proved particularly intriguing, with Wyman sharing details on the drummer’s excessive lifestyle and the time that he ‘threw a cat’ at his girlfriend.
“Keith was a wonderful guy but, God he did overindulge. The doctor would come round and give him so much bloody stuff, then three days later Keith would’ve taken it all,” Wyman says. “There’d be Valium 10s, sleeping pills, wake-up pills and speeding pills, and he would just down them all the time. And there’d be champagne in the mornings, with brandy. I used to watch him in disbelief.”
“Once I was making a cup of tea in the morning and his lovely Swedish girlfriend [Annette Walter-Lax] came down – I’d heard them fighting upstairs – and she had scratches down each side of her face, with blood. I said: “Annette, what happened?” And she went: “Oh, nothing. Keith just threw the cat at me.”
Wyman continues, explaining how, although the drummer became infamous for his outlandish behaviour, he was even more peculiar around those who he was close to:
“He’d do the maddest things. If he’d be meeting me […] he’d arrive in a full hunting uniform. He’d have been out and hired fox-hunting gear: hat, coat, riding crop, jodhpurs,” the bassist explains. “One time he bought a cemetery in the West Country as a birthday present for [Who bassist] John Entwistle.”
The post Ex-Rolling Stones bassist recalls the time Keith Moon ‘threw a cat’ at his girlfriend appeared first on Guitar.com | All Things Guitar.