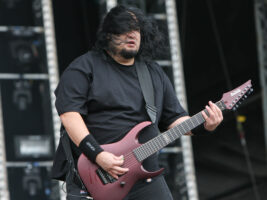 Fear Factory’s guitarist on touring post-pandemic: “We’re just not gonna be making the money that we would normally make”

Dino Cazares, guitarist of Fear Factory, has spoken out on the COVID-19 pandemic’s impact on the live music industry, and how the cost of touring is affecting the band’s earnings.

READ MORE: The Ed Sheeran and Cradle Of Filth collab appears to be complete

The band released their latest record, Recoded, back in October and are set to begin their Rise Of The Machine North American tour in February next year. And Cazares isn’t the only guitarist concerned about the expensive costs of life on the road – Devin Townsend had also expressed similar frustrations earlier this month (December).
In a new interview with the Vulgar Display Of Podcast, Cazares said: “So much has changed in those couple of years, because look how much the economy has gotten really, really over the top, with gas and even availability on certain things, even drivers; just getting a driver, it’s hard.”
He continued, “People really don’t understand the cost that goes into doing these tours. Everything affects you, whether it’s venues taking a big cut of the merch sales to insane diesel and gas prices.” He later added, “We’re just not gonna be making the money that we would normally make to do that tour, but we’re still gonna do it; we’re committed to it. We can’t wait to get back on the road and just play in front of all those people.”
Cazares then went on to conclude by explaining, “Food prices have gone insanely high. So people should be able to relate to it in that way. Speaking in the third person, if it’s hard for that person to pay rent or to buy food, imagine what it’s like for us to be out there touring. People have this misconception, just because you’re on the road, you’re making big bucks and you’re a rich guy. We are affected by it just as much as they are – as a matter of fact worse, ‘cause we have more overhead.”
You can get tickets for Fear Factory’s upcoming tour at fearfactory.com.
The post Fear Factory’s guitarist on touring post-pandemic: “We’re just not gonna be making the money that we would normally make” appeared first on Guitar.com | All Things Guitar.