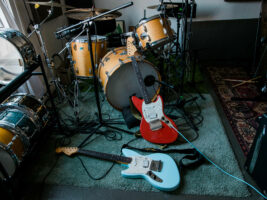 Fender has brought back the Fender Jag-Stang to mark the 30th anniversary of Nirvana’s celebrated album Nevermind. The guitar brings together design elements of two of Kurt Cobain’s favourite guitars, the Jaguar and Mustang, and is available in both right- and left-handed models.

Cobain had designed the guitar by snapping pictures of a Mustang and Jaguar and splicing those images together, he told music journalist Nardwuar in 1994. Despite being the signature model most associated with the frontman, he only ever played the guitar a few times live.
The Jag-Stang has an alder body and a maple, slim C-shaped neck with a rosewood fingerboard. Similar to the Mustang, the Jag-Stang is a short-scale electric with a 24-inch scale length.
The guitar has a combination of a custom humbucker in the bridge and a single coil in the neck. Those are routed to the Mustang’s on-off slider switches, which let you engage each pickup individually, as a pair, or have them on and out-of-phase for a thinner sound.
As for hardware, the guitar has a vintage-style Mustang bridge with vibrato, as well as vintage-style tuning machines and a synthetic bone nut. The guitar also comes with a deluxe gig bag.