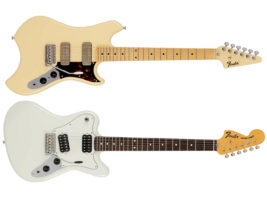 Fender Japan has revisited two legacy models for 2021 with a signature Swinger electric for King Gnu guitarist Daiki Tsuneta and a limited-edition Super-Sonic.

READ MORE: The best guitars to buy in 2021: 10 best versatile guitars for any genre

Both models were announced on Fender Japan’s Instagram page last week and will be available in Japanese markets. However, you can expect to see these pop up on online marketplaces such as Reverb in the near future.

Fender’s signature model for Daiki Tsuneta is an updated take on the Fender Swinger, first introduced in 1969 in a small run. The model has only been reissued once before by Fender Japan back in 2019.
The Fender Daiki Tsuneta Swinger has a basswood body and custom U-shaped maple neck. It sports a pair of soapbar pickups, controlled by a three-way switch and master volume and tone knobs. The guitar also features a vintage-style synchronised tremolo, which marks a change from the original’s hardtail design.
The Super-Sonic was last reintroduced in Squier’s Paranormal Series last year, but it’s been eight years since the release of a Fender version. The 2021 Super-Sonic is made in Japan and has a basswood body, U-shaped maple neck with rosewood fingerboard, reversed headstock and two Fender Dragster BB humbuckers. It comes in Blue Sparkle, Black or White.
Image: Fender Japan
Pricing and availability
The Fender Daiki Tsuneta Swinger will be available in October 2021 at ¥165,000. A launch date for the Super-Sonic has not yet been announced, but it will be priced at ¥136,620. Both models come with a gig bag.
The post Fender Japan introduces Daiki Tsuneta signature Swinger and a limited-edition Super-Sonic appeared first on Guitar.com | All Things Guitar.