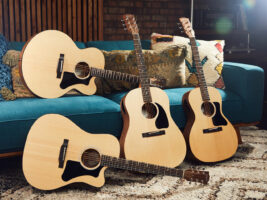 Gibson’s Player Port stems from an original concept from the early 1960s that first appeared in blueprints for a model that never went into production called the Modern J-45. Fast-forward over half a century and a refined version of this idea appears on the Generation Collection, offering what Gibson says is a more immersive experience that gives the player the best seat in the house.
The Generation Collection contains four models, all with walnut backs and sides and Sitka spruce tops. The G-00 and G-45 are completely acoustic while the G-200 EC and G-Writer EC come equipped with LR Baggs pickup systems, binding and fancier inlays.
To give you an idea of how these models sound, in this video, Guitar.com Chief Editor Chris Vinnicombe plays the same basic part on each guitar in turn. We’ll also fade between the mics and the pickup system when playing the guitars with onboard electronics. The guitars have been mic’d in stereo to try to give you a more three-dimensional picture of the way the Player Port throws out the sound.
For more videos, click here.
The post First Look: Hear Gibson’s new Generation Collection acoustics in action appeared first on Guitar.com | All Things Guitar.