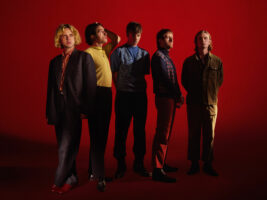 Dublin post-punks Fontaines DC have announced their third studio record, Skinty Fia. The album is set to be released on 22 April, and its announcement has come alongside the release of a video for lead single Jackie Down The Line.

READ MORE: “You start to see how you can make the guitar sound so much bigger”: Fontaines DC on taking things to the next level on A Hero’s Death

The album features producer Dan Carey, who worked with the band on their first record Dogrel and their second A Hero’s Death.
Skinty Fia’s cover
The title is an Irish phrase, which translates to “the damnation of the deer.” A press release states that the record sees the band members “addressing their Irishness from afar as they recreate new lives for themselves elsewhere,” with the title echoing the extinct Giant Irish Deer, and the deer that finds itself out of its natural habitat on the cover. Sonically, the record is set to be “ more expansive and cinematic” than the band’s previous two.
Check out the video for Jackie Down The Line below. It features dace and choreography from artist Blackhaine.