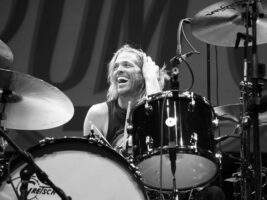 Foo Fighters have announced the guests who will be joining them at the two upcoming tribute shows for Taylor Hawkins in London and Los Angeles.

Among the high-profile names joining the Foos themselves at London’s Wembley Stadium on 3 September include Liam Gallagher, Josh Homme, Geddy Lee, Brian May, Roger Taylor and Wolfgang Van Halen, while the 27 September show at the Kia Forum in Los Angeles will feature the likes of Gene Simmons, Nikki Sixx, Miley Cyrus, Joan Jett and Alanis Morissette.
Comedian Dave Chappelle is also set to join the London tribute show in a special appearance.

Tickets for both shows go on sale tomorrow, 17 June. Proceeds from the tribute shows will benefit charities in the UK and US chosen by the Hawkins family, with further details to be announced shortly.
Hawkins passed away in March at the age of 50, while the band was on tour in South America. Following his untimely passing, the band cancelled their upcoming tour dates. They wrote in a statement: “It is with great sadness that Foo Fighters confirm the cancellation of all upcoming tour dates in light of the staggering loss of our brother Taylor Hawkins.
“We’re sorry for and share in the disappointment that we won’t be seeing one another as planned. Instead, let’s take this time to grieve, to heal, to pull our loved ones close, and to appreciate all the music and memories we’ve made together.”
The band swept the 64th Annual Grammy Awards on 3 April, winning a Grammy in every category they were nominated in, though they were not in attendance following Hawkins’ passing.
The band won Best Rock Album for Medicine at Midnight, Best Rock Song for Waiting On A War, and Best Rock Performance for Making A Fire. With the wins, they have become the first American band to win 15 Grammy awards.
The post Foo Fighters announce guests for Taylor Hawkins tribute shows including Liam Gallagher, Brian May and Josh Homme appeared first on Guitar.com | All Things Guitar.