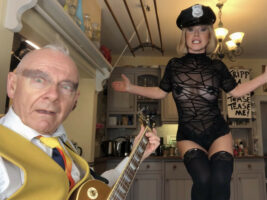 Robert Fripp and Toyah Wilcox’s Sunday Lunch cover series has returned, and this time the pair take on a punk classic – The Clash’s Should I Stay Or Should I Go.

READ MORE: Robert Fripp and Toyah kickstart 2022 with a spicy cover of Teenage Kicks by The Undertones

Wilcox wrote in the video’s description: “They are back for another edition of Sunday Lunch. It’s always tease, tease, tease, you’re happy when I’m on my knees…. I don’t think we need to say anything else :-)”
Check out the cover below.

As the Sunday Lunch series continues, it looks as though Fripp’s other project, the legendary prog-rock band King Crimson, have called it quits. A cryptic social media post from Fripp, made last December, had fans wondering if the final date of the band’s Music Is Our Friend tour in Japan was the band’s last-ever show.
“[King Crimson’s] final note of Starless, the last note of this Completion Tour in Japan, moved from sound to silence at 21.04,” Fripp wrote in a tweet. It was accompanied by a photo of the band onstage at Tokyo’s Bunkamura Orchard Hall.
Longtime bassist Tony Levin also posted on his blog about the final concert of the tour, calling it “quite possibly the final King Crimson concert” in his detailed write-up. “Great people, all hard workers who make our shows possible,” Levin wrote. “And now we’re saying goodbye until the winds of fate bring us together again.”
Despite releasing no new studio albums, King Crimson’s three-drummer iteration has been the band’s longest-running line-up to date, being active since 2013.
The post Fripp and Toyah go punk with cover of The Clash’s Should I Stay Or Should I Go appeared first on Guitar.com | All Things Guitar.