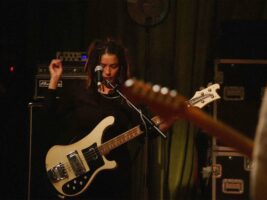 Nigel Godrich’s highly-acclaimed From The Basement live performance video series has returned with a new season which will debut next week.

READ MORE: “I see things that I want to move on from, and one f them is the seven-minute song”: Warpaint’s Theresa Wayman on tightening, loosening, and striking a balance

The third season of the series, which puts bands more commonly seen on the big stage in an intimate studio space with no audience, will premiere on 1 June at 6pm BST with a performance from IDLES.
Other performances from artists such as Nilüfer Yanya, Sons Of Kemet, Warpaint, Squid and Caribou are set to follow, with episodes dropping until October.
Godrich, who launched From The Basement as a web series back in 2006, said he felt grateful for the opportunity to bring the series back with coverage of today’s hottest artists.
“What a pleasure it has been doing this again!” the music producer said in a statement. “I’m still just a fan, still super excited to have the opportunity to film all these great artists and have loved making these new shows.”
“After being so busy doing other things I felt that the time was right to rekindle this idea… to somehow bring it into the present, but the same rules apply now as they did then… no audience or presenter… just a direct connection with the viewer and a chance for us to take some time to do something special in a controlled environment… the priority being to make it sound and look great…”
Joe Talbot of IDLES added that finally being on the programme was something that the band wanted to do “for a very long time.”
“There’s an atmosphere on From the Basement that I haven’t seen equalled – it’s unlike anything else,” said Talbot. “There’s a sense of mythology behind it and it’s a dream for us to be involved.”
From The Basement’s relaunch comes in partnership with WeTransfer and Sonos Radio. The former’s subscription service offers one exclusion bonus track per artists in the new season, while the latter will broadcast new and archived content from the series.
Watch the trailer for From The Basement’s third season below:

The post From The Basement returns with sets from IDLES, Nilüfer Yanya, Warpaint, Squid and more appeared first on Guitar.com | All Things Guitar.