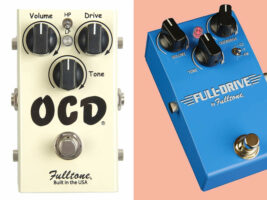 Fulltone pedals have become a hot item on the secondhand market as the boutique brand’s reported closure continues to be discussed in guitar circles.

READ MORE: Guitarists are raving about this $58 pedal John Mayer used on tour

Prices for pedals like the Fulltone OCD Obsessive Compulsive Drive Pedal and Full Drive 2 Mosfet have spiked on online guitar marketplace Reverb.com, with the site’s price guide showing an astronomical 100 per cent increase in prices for certain pedals.
Per Reverb.com’s transaction history, used OCD V1 Series 4 pedals have sold for between $249 to $300 just yesterday (31 August) in stark contrast to just a few months ago, where you could pick one up for between $90 to $105.
One listing for a “very early” Fulltone OCD V1 Series 4 Obsessive Compulsive Drive Pedal has a list price of $499.
Frustrated gearheads have flocked to forums like The Gear Page to lament the sudden spike, with one user remarking, “Fulltone closed and people seem to forget how many OCDs are floating around in the world. Not exactly a rare pedal,” while another concluded that the spike was simply a case of economics and the sellers were “high on one’s supply and off the deep end.”
Reports surfaced last week (25 August) suggesting Fulltone is closing down its outlet in California, with the pedal maker’s premises in Culver City being advertised for sale on commercial property site Loopnet after 30 years of operation.
An alleged statement from founder Mike Fuller, which circulated online, wrote: “I’m closing the Fulltone CA Shop because I will not start pumping my personal money into a business that no longer turns a profit… this four year climate makes 100 per cent made in the USA impossible.”
JHS Pedals founder Josh Scott weighed in on Fulltone’s reported closure in a video, calling it a sign of changing times. “I think that Fulltone signifies the ending of this [boutique pedal] era. There’s really nothing left,” he said on his weekly YouTube series The JHS Show.