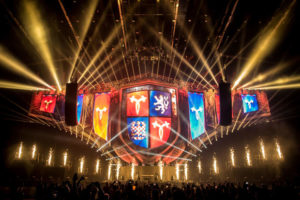 Funktion-One delivers at Transmission Asia with Vero and Evo systems

Transmission Festival Asia returned to Bangkok in 17 March, with world-renowned DJs mixing EDM delivered with the help of a Funktion-One sound system

UK-based Funktion-One supplier Audio Plus was responsible for providing the entire audio system – a continuation of the relationship first forged in 2009, when organiser and promoter Anco van der Kolk first approached them to provide a PA for the original Transmission events in the Czech capital of Prague.

When no suitable Funktion-One system could be sourced in south east Asia, van der Kolk once again turned to Audio Plus, who agreed to ship out the required gear to Thailand for the event.

Audio Plus project manager Kris Hayes commented: “Vero and the Evo are both fantastic products. What Funktion-One have done with the sound of both systems is huge – especially in the low mid range – and the practicality of both Vero and Evo have made a massive improvement to our workflow on site.”

The system used at the Bangkok International Trade and Exhibition Centre (BITEC) – the venue for Transmission Asia – mirrors the one used at Spirit of the Warrior’s debut in Prague last year, adapted to suit the specific requirements of the site.

Two Evo 7Ts, two Evo 7THs and two Evo 7TL-215s per side were flown as delays, while six Resolution 5Ts were used as fills along the down stage edge.

Hayes added: “It’s such an easy system to fly, even with the language barrier, the locals had the hang of adding cabinets and setting angles on the array as it’s going up.”