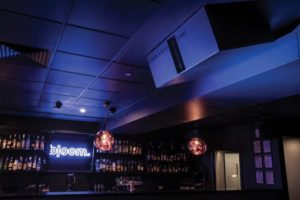 Located in the seaside town of Geelong, 75km southwest of Melbourne, Bloom’s owners Ayman Muhor and John Kennedy wanted to create and a venue that “would have one of the best sound systems in Australia”.

They approached Full Throttle Entertainment, who in turn recommended Funktion-One. Full Throttle’s Adam Ward recalls: “ The venue needed to raise the bar for the local area in terms of production value with a specific focus on the quality of the audio system.”

As well as impressing a clientele long underserved by the local club scene, the team wanted to ensure the audio would satisfy the needs of visiting international DJ heavyweights. Furthermore, it needed to be able to switch gears into a live entertainment space at a moment’s notice.

Ward continues: “Funktion-One is ideal for this install. Whether it be for live or for playback, the speakers sound great. Along with the great sound, Funktion-One is a recognisable brand that is a marketable commodity to the end user. No other brand, in my opinion, draws the attention that Funktion-One does.”

With architectural drawings initially unavailable, Ward visited the site to draw up his own plans, so he could begin designing the system. An underground space, once home to a McDonald’s restaurant, the venue comprises a myriad of hidden spaces connected to a larger area that straight away suggested an underground bunker-style dancefloor. “It wasn’t hard to design the system, as the space seemed to tell you what each area needed to be,” comments Ward. “The client was on board with all of our suggestions and approved the budget straight away.”

For the main dancefloor, a traditional stereo left/right stack is located either side of the 8m x 3m stage. Each stack comprises one Funktion One Evolution 6 loudspeaker flown over a ground-stacked Funktion-Ones BR221 double 21-inch Bass Reflex subwoofer.

The bar consists of four Funktion-One F101 loudspeakers supported by two Mini-Bass 212 subs. Each F101 is mounted in the four corners of the bar with a MB 212 in the centre at each end. The MB212s are built into custom ceiling mounted soffits that give the install a discretely stealth quality. Only the front of each subwoofer is exposed, with the majority of the enclosure integrated into the ceiling.

The VIP room consists of two F101s, with the option to add in an MB210 in phase two of the build. The side room consists of two F101 as the main space reinforcement, with four F81s over the sunken lounge – all supported by an MB212. At the click of a button, this room can operate as an additional space for overflow, a chill out area with streamed music, or a completely separate entertainment space with a DJ.

Ward notes: “Every step of the way the client was happy to take our lead and listen to and execute our suggestions.” This included advice on acoustically optimising the space. “The client took on board the importance of the acoustics and was happy to come to the table with the funds to deliver the necessary treatment,” Ward continued. “The space sounds like a studio.”