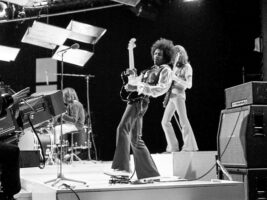 Well, folks, it’s been a trip. For the last four months we’ve charted the unlikely and remarkable birth of fuzz, from a one-chance-in-a-million studio accident to the creation of the first ever effects pedal: the Maestro Fuzz-Tone FZ-1. We’ve also covered how that particular box of wonder was marketed so terribly that it almost ended up as a footnote in the history of popular music. Almost. Not quite.

READ MORE: Fuzz Was The Future: Now but not yet