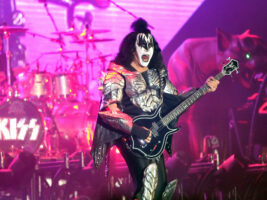 Gene Simmons of KISS happens to be a pretty big fan of Swedish pop group ABBA, having praised them for their “undeniable songwriting”.

READ MORE: Gene Simmons on the secret to not showing his age: “You just have to worship Satan, that’s all!”

Underneath the very rock ‘n’ roll face paint, Simmons has a pretty broad taste in music it appears. The bassist revealed the top ten albums that changed his life in a new conversation with Goldmine, and his selections were impressively varied.
One that may particularly surprise people, is the rocker’s admiration for ABBA. He selected their Greatest Hits album as a record that left a big impact on him: “Yes, we like death metal, and yes, I like The Killers and I like Tame Impala — I like all kinds of things,” he said, justifying his choice.
“But what is it that rises [an artist] to a level of greatness no matter the musical genre? – it’s the ability to craft songs that are forever.”
He continued, “I was going to say The Bee Gees, but it pisses off a lot of people, but those songs are undeniable. So if I’m riding in my car and ABBA music comes on, I turn it up and that’s the sign of greatness. Undeniable songwriting.
“You just can’t touch it. That’s why I have to pick ABBA because it’s just undeniable. I could have said The Four Seasons or The Beach Boys because there’s a wealth of great material.”
Among his other choices were records from Led Zeppelin, The Beatles, Ray Charles and more.
The post Gene Simmons reveals admiration for ABBA, praises them for “undeniable songwriting” appeared first on Guitar.com | All Things Guitar.