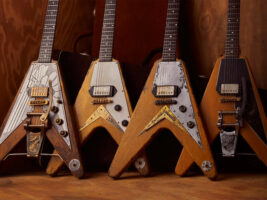 Gibson has teamed with revered luthier Leo Scala to launch the Master Artisan Collection with 10 unique takes on the ‘58 Korina Flying V.
READ MORE: The Big Review: Gibson Dave Mustaine Flying V EXP – A no-brainer V for thrash fans?
The one-of-a-kind instruments draw heavily from the well of Gibson history, with Scala described as working with “period materials and techniques [to] tinker and iterate as though the now-iconic design was brand new.”
“When I build a guitar, I am not building a guitar,” said Scala. “I’m first building a knob. Then I’m winding the pickup. I’m 100 per cent dialed into each and every one of those details. I build a whole lot of different little things. The guitar is just a place where everything comes together.”
The korina-bodied guitars break down into the The Classic, Hybrid and 777 series – available with either a black, white or metal pickguard – along with a very special Seraph model.
The Classic Series sticks close to 1958 specifications, with authentic 50s wiring and a Custom Wound “Retrophonic” bridge humbucker. The solid Korina bodied instrument also features a Brazilian rosewood fingerboard and was lacquered and aged by Scala himself.
The Hybrid Series builds on the Classic Series with an incorporated brass stop tail to the V plate for “alternate stringings”.
The 777 Series was inspired by Lonnie Mack’s ‘Number 7’ guitar, with a Bigsby B7 vibrato and skull knobs for the volume and tone control.

Last but not least, the ornate Seraph features a body made of a darker shade of korina with graphics on the back of the guitar and a metal double symmetrical pickguard with a 1937 Pontiac engraving. It also features a Schaller Roller Tune-O-Matic bridge, a Bigsby B7 vibrato and coil splitting talents.

Though visually striking, Scala also explained in a statement that, with his creations, he pays most attention to the sounds they can create.
“It’s always the sound,” he said. “It can be extremely flashy, but if you pick it up and it doesn’t do its own thing, then you just missed the whole point. It’s not art that should be hanging on a wall; it’s a performing piece of art.”
The post Gibson debuts the Master Artisan Collection with 10 Flying Vs designed by Leo Scala appeared first on Guitar.com | All Things Guitar.