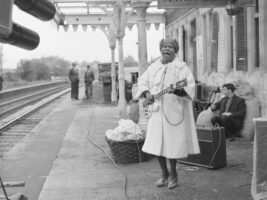 Gibson has released a mini-documentary online centred around Sister Rosetta Tharpe, an overlooked figure in blues and rock ’n’ roll history which paved the way for the genres.

READ MORE: Amp FAQ: What’s the difference between high and low inputs on an amp anyway?

Shout, Sister, Shout! is narrated by Celisse (guitarist for Lizzo) and discusses the life and career of Sister Rosetta Tharpe, the guitarist-singer who’s been referred to as “The Godmother of rock ‘n‘ roll” and “the original soul sister”.
Tharpe’s music, which blended spiritual lyrics and electric guitar playing, had tremendous impact on early rock musicians, including Little Richard, Chuck Berry, Elvis Presley and Jerry Lee Lewis.
“Sister Rosetta’s immense talent and confidence arrived during an era when women, and especially women of colour, had no voice,” wrote a statement from Gibson. “An era where no woman dared play guitar at the front of the stage, let alone front a solo act. No woman except Sister Rosetta Tharpe.”
The documentary also notes Tharpe’s wedding ceremony in 1951, held at Washington D.C’s Griffith Stadium, where she performed to an audience of 25,000. This, all happening years before the Beatles ever embarked on their acclaimed American stadium tours.
The film also discusses the problems of racial segregation in the Southern US. Despite her success as a recording artist, Tharpe was forced to sleep on tour busses while playing dates in the South, while her white bandmates were afforded the luxury of sleeping in hotel rooms.
Rock guitar would have never been without the luminary: Tharpe was one of the first popular recording artists to make use of heavy distortion in her playing. A tour of Europe she embarked on with Muddy Waters in the 60s was said to have strongly impacted British blues, with the likes of Keith Richards, Eric Clapton and Jeff Beck noting a particular concert in Manchester on 7 May 1964.
Watch the Shout, Sister, Shout! below:

Aside from the documentary, Gibson celebrated Tharpe’s work with the release of signature guitars, both a Gibson and Epiphone version, modelled after her 1961 Les Paul Gibson SG Custom. Additionally, the brand released a special strap and apparel
Image: Gibson
The post Gibson drops a mini-documentary on the godmother of rock ‘n‘ roll, Sister Rosetta Tharpe appeared first on Guitar.com | All Things Guitar.