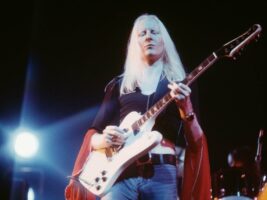 Gibson has honoured the late Johnny Winter with a meticulous reproduction of the blues-rocker’s Firebird, featuring a number of signature appointments and some characteristically missing parts.

READ MORE: The best Christmas and holiday gifts for guitarists in 2021

The Gibson Johnny Winter 1964 Firebird V is said to be a “complete replication” of Winter’s iconic guitar, with plugged holes in its body and a removed Maestro Vibrola, missing reflector on the rhythm tone knob, and a faded Firebird logo on the pickguard.
The Murphy Lab brings to life the custom-aged Polaris White finish which stays authentic to the finishes of the era.
The package is completed by a variety of case goodies for fans: a “signed” Johnny Winter print, photographs shot by Mick Rock, a Johnny Winter Texas Slide, Gibson vintage reissue strings and a certificate of authenticity.
As for the guitar’s specs, it features a 9-ply mahogany/walnut neck-through design with solid mahogany wings and an Indian rosewood fingerboard with 22 frets. Pickups include a duo of Firebird Alnico 5 humbuckers which route to two volume and tone controls, as well as a three-way switch.
Image: Gibson
Gibson’s Johnny Winter 1964 Firebird ships in a custom faux-fur-lined case and is available at $8,999.
Learn more at gibson.com
The post Gibson fires up the Johnny Winter 1964 Firebird V with some characteristically missing parts appeared first on Guitar.com | All Things Guitar.