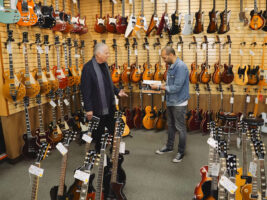 Gibson TV has announced a partnership with US TV network Circle, entailing a new series entitled Gibson: The Scene. The show will travel America, and showcase historic music venues and other locations important to country music history.

Circle Network describes itself as “dedicated to celebrating country music and the country lifestyle,” and the collaboration will marry this with GibsonTV’s extensive history of in-depth guitar content.
Gibson: The Scene will be hosted by Mark Agnesi, premiering on 19 August at 10 PM EST. It will explore venues, record shops, guitar shops and studios such as the Station Inn,
Carter Vintage Guitars, The Grand Ole Opry House, The Troubadour, RCA Studio A, Capitol Records Studios, Third Man Records and Amoeba Music. There will also be a tour of Gibson’s own Nashville Factory, and its newly-launched Gibson Garage.
Agnesi said of the programme: “It’s an absolute honour and dream to take people through some of the most hallowed halls country music has to offer. The first season of Gibson: The Scene takes us through iconic spaces, hidden gems, and everything in between. I can’t wait for our fans to hear about some of the incredible moments that have happened in these settings and add them to their list of places to visit as the entertainment world continues to get back to performing.”
Circle Network’s Content Senior Vice President Evan Haiman added: “We are thrilled to partner with Gibson, a truly iconic brand, and show our viewers fresh perspectives of these beloved locations in new, more intimate ways. We’re looking forward to seeing Mark and his team show us these historic halls, but also illustrate how inextricably linked country music is to Gibson guitars.”
The programme will last until 21 October, with ten episodes airing across the series. Circle Network is available through certain selected Smart TVs and over traditional digital channels/cable boxes in certain areas. The network is also notably only available in the US and Canada.
The post Gibson TV partners with Circle Network for new docuseries, Mark Agnesi to host appeared first on Guitar.com | All Things Guitar.