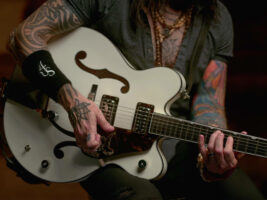 Gretsch has launched its new G6636T-RF Richard Fortus Signature Falcon Center Block. It comes in two versions, one with a V-stoptail and one with a Bigsby.

Developed to the specifications of the ex-Guns N’ Roses guitarist, this double-cutaway model features a maple body and neck, as well as a light-chambered spruce centre block. Its electronics include a pair of custom-wound Filter’Tron pickups in the bridge and neck positions for versatile output.
Fortus said of the launch in a statement: “Gretsch has always been such an integral part of rock n’ roll tone. From Malcolm to Harrison, Neil Young to Billy Duffy. It’s such an honour and lifelong dream to have my name associated with it.
“I wanted something that I could play all night for rhythm and lead. With their classic Gretsch chime, along with their super thick and tight low end, these Falcons are built to be all-around versatile guitars for all types of players.”
The Bigsby-equipped model is offered in a vintage white finish, while the one with the V-Stoptail edition comes in black. Both feature TonePros Tune-O-Matic bridges, the Bigsby-equipped model comes with roller saddles and pinned ebony base for greater playing stability
You can hear Fortus discuss and play the guitar in Gretsch’s official video below.