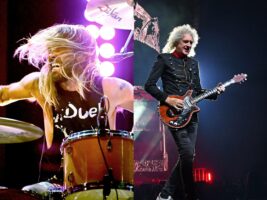 Joan Jett, Kesha, Alanis Morissette, Travis Barker, The Police‘s Stewart Copeland and Metallica‘s Lars Ulrich were only some of the guests who graced the stage at the concert, which was held on 27 September at the Kia Forum in Los Angeles. The concert was also professionally filmed for a potential future release, according to Yahoo!.
“Taylor was friends with every fucking musician on earth,” frontman Dave Grohl told fans in attendance. “Just so you know there’s like 15 drummers in the house tonight. Taylor was friends with them all.”
Among the highlights of the night was Led Zeppelin‘s John Paul Jones once again reuniting with Them Crooked Vultures for a cover of Elton John’s Goodbye Yellow Brick Road and Queens of the Stone Age’s Long Slow Goodbye, and their own 2009 track Dead End Friends. Dave Grohl, Josh Homme and touring member Alain Johannes previously joined Jones at the first tribute concert at London’s Wembley Arena on September 3, where they performed Gunman instead of Dead End Friends.

Queen‘s Brian May also joined in one of the most heartfelt moments of the night as he played Love Of My Life while accompanied by Taylor’s children Everleigh and Annabel and their mother Alison, who had specially requested May play that song.

May later joined Pink for a cover of Somebody to Love.

Rush, who are also mourning the loss of drummer Neil Peart, were joined by Red Hot Chili Pepper‘s Chad Smith for Working Man, before bringing in Danny Carey of Tool for a rousing rendition of YYZ.

Mammoth VVH’s Wolfgang Von Halen pulled out a tribute to both his father Eddie and Hawkins with Hot For Teacher and one of the Van Halen’s most successful tracks, Panama. Wolfgang later lightheartedly made fun of an earlier proclaimation he had made saying I’m not fuckin’ playing Panama for you guys” by adding the cheeky addendum “twice” following the performance, which saw Dave Grohl, The Darkness vocalist Justin Hawkins and Josh Freese playing alongside Wolfgang as they did at the London concert.

Hawkins passed away in March at the age of 50, while the band was on tour in South America. Following his untimely passing, the band cancelled their upcoming tour dates. They wrote in a statement: “It is with great sadness that Foo Fighters confirm the cancellation of all upcoming tour dates in light of the staggering loss of our brother Taylor Hawkins.
“We’re sorry for and share in the disappointment that we won’t be seeing one another as planned. Instead, let’s take this time to grieve, to heal, to pull our loved ones close, and to appreciate all the music and memories we’ve made together.”
The post Guitar highlights from the Taylor Hawkins LA tribute show: Them Crooked Vultures, Queen and more appeared first on Guitar.com | All Things Guitar.