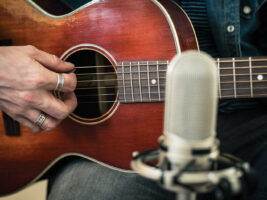 Guitar Recording FAQ: How to make acoustic guitars work in a band mix

My acoustic guitar recordings sound great on their own but they don’t sit well in a band mix. What am I doing wrong?
– Vanessa, Seattle
Capturing natural and balanced acoustic guitar recordings is something that requires skill and practice. Having done so, it can be dispiriting when you discover that context is everything, and sometimes you have to make things sound worse to make them sound better.

READ MORE: Guitar Recording FAQ: How to capture the sound of the amp in the room

To paraphrase a great line from The Incredibles, when everything sounds super, nothing does…
What’s the problem?
Roughly speaking, our ears can hear frequencies from about 30Hz up to 18KHz – or maybe 10K if you’re a metal guitarist. In a typical band mix, different elements are designed to occupy specific frequency bands.
The kick drum and bass guitar cover the low end, guitars, keyboards and vocals are more midrange-focused and the upper mids and treble frequencies are occupied by acoustic guitar, hi-hat and cymbals. But the reality is more complex than that, because most instruments cover a wide frequency range.
For instance, bass drums have a surprising amount of treble content and hats have more low frequencies than you’d imagine. Consequently, they don’t slot as neatly into specific frequency bands as we might like. Things get even harder when various instruments are all competing for the same frequency space, but there are various solutions.
Image: Getty Images
Picking the right guitar
Your favourite acoustic might not be the best guitar for the track. If you’re overdubbing an acoustic on a track dominated by loud, fat and distorted electric guitars, a big dreadnought or jumbo probably isn’t the best choice.
Those acoustic guitars typically generate a lot of bass and low mids, and the electrics will already be doing that. If you’re adding acoustic for rhythmic drive and some percussive chime, try a smaller-bodied guitar.
Conversely, a country-style track with lots of bright and twangy electric tones might need a warmer and bigger sounding acoustic to fill out the mids. The woodier and darker sounds of a Gibson-style acoustic may sound better in this context than the brighter and more ethereal qualities of Martin-style guitars.
And if you can’t swap guitars, try swapping your strings. If you need extra brightness, try replacing those dead old strings with a fresh set of phosphor bronzes. Conversely, a played-in set, or some naturally darker sounding strings, might be preferable. Martin Retros are a great option for this, and you should also experiment with different plectrums because thin ones always sound brighter and more percussive.

Equalisation
Although we always advocate getting the sound right at source, equalisation can provide subtle refinements or be your ‘get out of jail’ card during recording and mixing. The key is understanding how equalisation can be used.
Starting simply, if your microphone, preamp or equaliser has a bass roll-off switch, you should use it. Acoustics generate nothing useful below 75Hz, so this can clean up a lot of boominess and low frequency clutter.
At the other end of the frequency spectrum, you may want to boost high frequencies to help the acoustic to cut through, or reduce them to sweeten the tone. It’s always best to listen to the sound you’re working on in context rather than solo’d when you’re making EQ adjustments.
Whether you’re using analogue outboard or, more likely these days, a plugin, set your parametric equaliser’s Q/bell (bandwidth) control for a narrow range, apply a 6dB boost and then slowly sweep around the frequencies and listen to the sound change. If you start hearing the result you wanted, then you’ve found the right frequency. From there you can fine tune the amount of boost and broaden the Q setting to soften the effect.
You can use the same procedure to identify and remove unwanted frequencies. Acoustics tend to get boomy and congested in the low mids, so if a frequency jumps out that has an unpleasant ring or detracts from the punchiness of the rhythm section, you can swing the +/- control the other way and dial that out.
Depending on the guitar and the microphone placement, 400Hz is a good starting point when you’re tightening low mids. Using equalisers to cut rather than boost creates frequency pockets for other instruments to occupy and it’s an effective way of helping an acoustic to sit nicely under a lead vocal.
Once that acoustic is sitting well in the track – sounding clear but not taking up too much space – try soloing it. You may find that it sounds great in the track but not so good in isolation. If that’s the case, don’t let it bother you.

Chord voicing
When layering guitars, we usually still want to be able to distinguish the individual parts. That will be hard to achieve if you play exactly the same thing on every overdub. One solution is to play the chords in different areas of the fretboard.
If the electrics are playing open E chords, try finding ways to play E major higher up your acoustic’s neck. Capos can be extremely useful because if you place one at the second fret at play your usual open D shape two frets up, there’s your higher inversion of E major. A capo at the seventh with an open A shape will work too, and you can have fun figuring out how to play the rhythm part with capo’d chords.
Nashville tuning
You’ve almost certainly heard this on countless classic recordings, in which the acoustics sound nicely defined and floaty, but the mix still retains clarity and space. The trick is to use the high octave strings of a 12-string set so the B and high E are tuned normally, but the E, A, D and G are tuned an octave higher than usual.
It sounds like the effect we often want from a 12-string, but without any of the problematic boom and thud. And when you combine a capo with Nashville tuning things can get very interesting.
And if there’s a keyboard player in your band, try explaining that having ten fingers doesn’t mean that they are obliged to use all of them all of the time. If that doesn’t produce the desired results, try taping their left hand behind their back. You’ll be amazed how much space that will clear up for your guitars in general!
For more features, click here.
The post Guitar Recording FAQ: How to make acoustic guitars work in a band mix appeared first on Guitar.com | All Things Guitar.