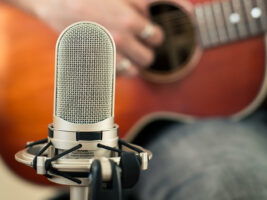 How do I record my acoustic guitar with only one microphone?
– Chuck, Portland
Hi Chuck. When you distil things right down, acoustic guitars are essentially mechanically driven loudspeakers. Instead of a paper cone driven electronically by a voice coil, there’s a sheet of timber called the soundboard, which is put into motion by string vibration.

READ MORE: Guitar Recording FAQ: How to capture the sound of the amp in the room