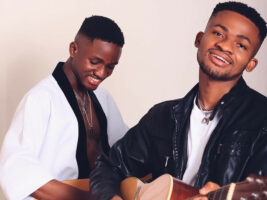 Back in 2019, I had just started Fingerpickers In Africa, and was busy hunting for my fellow fingerstyle guitarists on the continent. In the course of this search I found Godwyn on Instagram and later on the same year we played together for Johnny Drille in Kigali. When we hung out, it was clear that Godywn was someone who takes pride in keeping himself at peak fitness, and is always making sure he’s hydrated with water and cucumber.

That might not be the most rock ‘n’ roll thing for a musician to imbimbe, but it’s important – not only because it helps him to stay healthy and productive, but also ensures that he’s looking on point when he and his brother Ricky Lace are performing some afrobeat music on guitar shirtlessly for their army of Instagram followers. Yes I said shirtlessly.
Both Godwyn (aka Godwin Ufot) and Ricky (God’s Favour Ufot) are from the southern part of Nigeria, specifically Akwa Ibom. They grew up together in Lagos, Nigeria where they started playing the guitar.
The Nigerian music industry is massive, and is becoming globally recognised as a hotbed of exciting new talent, making it all the more competitive, and it’s something that Godwyn and Ricky are painfully aware of.
“Yes, the Nigerian music industry, and especially the artists from it, are having global recognition,” says Godwyn. “When I make references to projects I have worked on, especially with artists that have gotten some global recognition, it adds some weight to my portfolio of works.”
However with their acoustic guitars Godwyn and Ricky have added value to the industry in their own unique way with their immense guitar skills. For Godwyn, it also keeps him on his toes to keep getting better. “There is a lot of demand and it keeps me steadily learning and growing!” he adds.
Ricky Lace. Image: Press
Career manifesting
“I have always loved music and musical instruments, my hands got to the guitar first through a friend’s dad,” Godwyn recalls. “I would go to their house every day to practice and maximize the little time, I could play their guitar until my parents saw my deep interest and got me a guitar. So it wasn’t a dream, it was just a wild kid who got interested in playing the guitar after seeing it in a friend’s home. I even majored in Economics not related to music school”
“Honestly playing the guitar was just a hobby and seeing things turning like this wasn’t planned,” Ricky adds “I studied mechanical engineering in school!”
Godwyn got introduced to Instagram and signed up, he started posting short clips playing and his first few videos on Instagram started getting a lot of engagements. Then one day, he got a DM from a top music guru, maybe one of the most influential music personalities in Nigeria and Africa as a whole, Don Jazzy.
“He asked me to come to his studio and produce my first ever recording [Promise ft Di’Ja] around 2015 and that was how I started taking music seriously,” Godwyn recalls. “Before then, music was just a hobby. Technically if I compared it to how some people got to the limelight, I would say it wasn’t so hard for me. I got to meet a music guru Don Jazzy, not everyone has that opportunity. Every year has some atom of progress.”
For Ricky it wasn’t easy, at least initially: “My parents weren’t really in support of it at the time and wanted me to face my studies in school,” he explains. “Then people try to take advantage of you without paying and other experiences. But it was the little price to pay. When the opportunity came to me, I grabbed hold of it. People wanted someone skilled on the guitar like I was and here I am!”

Getting shirty
“So far so good is all I can say,” Ricky chuckles when I ask about journey to date. “Looking back to see where we came from and where we are as a group and as individuals I’m grateful. Cause if anyone would have told me three years ago I’d be getting interviewed by Guitar.com, I’d say it was a lie!
Talking of the journey, the elder Godwyn always brings everything back to discipline, open mindedness, honesty, giving your very best to every opportunity and staying constantly learning as to what shaped him.
The secret of the Shirtless Guitar Boys’ success is in the way their uniquely African guitar styles meld – on the one hand you have Ricky’s afrobeat percussive guitar style which is all about playing and hitting the guitar rhythmically, harmonised by Godwyn’s sweet highlife melodies.
The pair originally started playing together when Ricky was Godwyn’s student and provided a rehearsal partner for Godwyn. These brothers who had a long history playing together his big brother with a rehearsal partner – in no time a synergy developed that long predated their foray into social media, the thirsty roots of which came about through serendipity.
Godwyn. Image: Press
“One day it was very got because of the weather, so we took off our shirts on a break to cool down and then shot a video and it came out nice!” Ricky chuckles. “Then Godwyn said we should go ahead and post it.”
The Shirtless Guitar Boys are about much more than performing shirtless on Instagram. The pair also have their own music school, the Rainbow Fingers Academy and their own guitar shows that saw them work with actor and singer Rotimi (star of Boss and Power on his Unplugged sessions acoustic album, as well as artists such as Oxlade, Alpha P and Johnny Drille, to mention a few.
“I got a call to come vibe with an American artist who just came into Nigeria,” Godwyn reflects of their work with Rotimi, “I went with Ricky and as we vibed, he loved our energy and made a video that went super viral. He flew us to Ghana for his performance for Afronation and also got us to work on his acoustic project.”
Teaching is clearly a great passion for the two as well.
“The guitar school idea started some years back as there was an increasing need to duplicate my knowledge to others, so rather than do it individually, the idea of the guitar school came about,” Godwyn says. “My big bro Sam has always been supportive and also manages me and the academy alongside the online guitar shows. The guitar show idea was started by Ricky and the Live Acoustic Radio show was started by Sam, we all play major roles for the show success. Sam works with his team at Panda Impressio for the visuals, I make sure of the sound quality and also music arrangements and Ricky Lace handles the mixing and mastering stages. Everyone’s passionate about what they do and this makes the job quicker.”
When it comes to gear, the pair keep things minimal – just give them a guitar with a little reverb and they are good to go! They describe their creative process that they describe as not “rocket science” – they keep things as natural as possible.

“As a group all we need is the sound we want to achieve and we play,” Ricky says. “We’ve jammed a lot together so any time we play we connect and we make our videos as natural as possible so our audience can feel the emotion and soul in the sound.”
The Shirtless Guitar Boys are currently working to release some of the performances on their Instagram properly recorded on streaming platforms. They dropped one already. And can be found by searching Godwyn or Ricky Lace on Apple Music, Spotify and other platforms.
Follow the Shirtless Guitar Boys on Instagram at @iamgodwynguitar and @ricky_lace.
The post Guitar Tales: How the ‘Shirtless Guitar Boys’ Godwyn and Ricky bringing a unique twist to Afrobeat fingerstyle appeared first on Guitar.com | All Things Guitar.