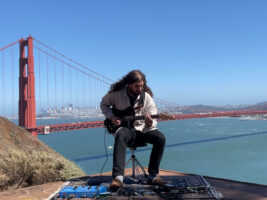 The Golden Gate Bridge in San Francisco has for the last year been making a strange humming noise on windy days. While some have described the sound as a nuisance, guitarist Nate Mercereau has instead used the sound as the backdrop to his own set of compositions.

READ MORE: Mattoverse’s Drone Tone MkIII is a glitchy synth for your pedalboard

Armed with his guitar and pedalboard, Mercereau recorded four improvised instrumentals accompanied by the drone of the bridge in the wind. The droning sound is discordant and eerie, and so Mercereau fittingly joins it with some ethereal, effects-soaked slide playing.
Mercereau explained in a statement: “I saw a headline in the San Francisco Chronicle that said the Golden Gate Bridge ‘humming is driving people crazy,’ and ‘a team of engineers is working to shut it up.’ When I heard phone recordings of the sounds the bridge was actually making, I knew there was potential to reframe these sounds as something unique and beautiful.
“Renovations to the bridge have caused it to vibrate and ‘sing’ in high winds, reverberating loud tones throughout the bay, effectively making it the largest wind instrument in the world. While I feel the pain of SF residents who are constantly subjected to this drone, there is nothing quite like hearing something so vastly large make that much sound powered by nature.
“It’s an all-encompassing immersive experience, even from a distance. The tones smear and crescendo as the wind picks up, and it gets so loud that at some points you can feel your own body vibrate with it. To get inside and create sounds with something so large and with that much history (including my own personal history of living in San Francisco) was an emotional experience. I could see my old neighbourhood from the recording location!
“I hope that by sharing these duets I can offer a recorded artefact of a world-renowned monument, and also an alternate perspective on its reverberations as something special to be appreciated while it’s happening.”
Engineers have reportedly determined that the sound is created by wind impacting a newly installed set of railings on the western side of the bridge, hence its recent appearance. They are currently working on dampening the noise to reduce the annoyance for local residents.
You can support Mercereau’s music and hear the full Duets | Golden Gate Bridge project on his Bandcamp page. See a video of him improvising one of the pieces below.