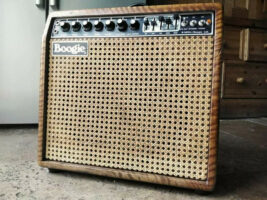 A guitarist has recounted his journey of being reunited with his custom Mesa/Boogie combo 28 years after it was stolen from the back of his car, involving disputes with two police forces and a long wait for the amp to appear for sale again.

Yesterday, Ray Taff Williams shared the story of the amplifier’s theft on Facebook, his initial unsuccessful attempts to recapture it and the triumphant end in which he was reunited with his one-of-a-kind Mesa Boogie combo.
The amplifier was ordered directly from Randall Smith, the head of Mesa/Boogie, in 1979. At the time, Williams was playing guitar in Ian Gomm’s band, supporting Dire Straits on tour in the US. Dire Strait’s tour manager’s connection to Mesa Boogie allowed Williams to expedite the custom-build process, receiving his fully-custom combo in just nine weeks.
Williams details how on 24 February 1994, he left Neath Technical College where he had been teaching to get some lunch – but found his car had been stolen. “My main concern was not for the car but for £5,000’s worth of musical equipment stored in the rear of the vehicle,” he said, which included the custom amplifier.
In reward posters, Williams gave information on the stolen car, however much more page space was reserved for extensive details on the amplifier. Details included the fact the reverb was broken, and only two of the 6L6 output tubes were in place as the other two had begun to arc. The distinguishing marks include some dents on the amplifier’s exterior, following a collision with a Shure Unidyne microphone.
Despite the details that Williams provided, and constant searching across the internet, the amplifier didn’t show up until 6 February this year. “I couldn’t believe my eyes when I spotted my amplifier for sale. I said to Lily, after 28 years I’ve found my amplifier,” Williams wrote. “She said, ‘how can you be so sure,’ I said, ‘like a mother would recognise her child.’”
Williams was left in no doubt – the description matched perfectly, down to the serial number. However, he describes a frustrating process in trying to get the authorities to take action to help him reacquire his stolen amp.
“I contacted South Wales police. Although they agreed the evidence I’d given proved I was the rightful owner, they were reluctant to do anything about it because so much time had passed. I asked if crime has a shelf life, which did make them a little more positive in registering my details. They contacted Cheshire police, as this is the area where the amplifier was being sold from.
“Cheshire police refused point-blank to follow it up, which made me totally dismayed, and left me with no other option than to make an official complaint against them for ‘neglect of duty’. They said because the initial theft was in Wales, then South Wales police should be dealing with it. South Wales police said, because the amplifier was now in Cheshire, it should be dealt with by Cheshire police. While this unbelievable childish bickering was going on between two police forces, I was totally dumbfounded by the lack of action from both forces in upholding the law.”
Following inaction from the police, Williams contacted the seller himself. “With calm and intelligent conversation, and producing the evidence of ownership, an amicable conclusion was reached. After 28 years, with no intervention from the police, the amplifier is now back with its rightful owner.”
Check out Williams’ full story over on Facebook, along with some photographs of the amplifier and the reward posters made following its theft.
The post Guitarist reunited with Mesa Combo amplifier after 28 years appeared first on Guitar.com | All Things Guitar.