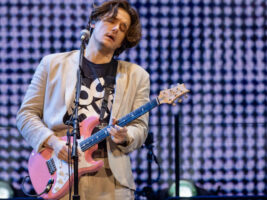 A piece of budget gear from John Mayer‘s 2013 and 2014 Born and Raised and Paradise Valley world tours has set the guitar world buzzing.

John Mayer devotee and gear YouTuber Justin Jeske revealed that the guitarist utilised a budget Mooer Ana Echo in his setup for both tours specifically for the live rendition of his track Paper Doll. Mayer specifically linked the Ana Echo to a TC Electronic Ditto and Keeley True Bypass for the song’s intro before returning to his standard Pete Cornish TES delay.
Several gearheads took to the comments section of Jeske’s video, pointing out that the TS-10 had once been an affordable pedal too, with one user remarking, “It’s crazy how much Mayer moves the entire market,” while another joked, “Hold my beer while I try to make this pedal become unaffordable.”

You can watch Mayer’s performance of Paper Doll with his Mooer Ana Echo below.

Mayer recently shared how he sets his overdrive with a lucky fan whilst on tour in Canada while signing the fan’s Klon Centaur. At his show at Toronto’s Scotiabank Arena in May, Mayer took the fan’s pedal back alongside his own rig, where he then dialled in the knobs to the same position and labelled the presets.
The artist also revealed in August that his song Walt Grace is due to become a major motion picture. After performing the track at the Rise for the River live streamed concert at Pine Creek Lodge in Paradise Valley, Mayer told the audience, “I want to say one thing that’s going to get me in trouble because that’s what I do. That song [Walt Grace] is soon to be a major motion picture. It’s true. It’s true. It’s going to be a movie.”
The post Guitarists are raving about this $58 pedal John Mayer used on tour appeared first on Guitar.com | All Things Guitar.