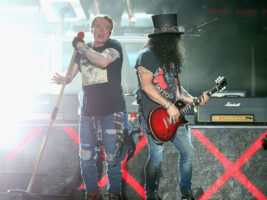 Guns N’ Roses have released their second new song of 2021, entitled Hard Skool. The track follows the single Absurd – both releases of 2021 are reworkings of songs originally laid down in the sessions for 2008’s Chinese Democracy.

Ahead of the release of the Hard Skool, Guns N’ Roses guitarist Slash posted a video of himself rehearsing the new song at a soundcheck in Chicago.
Rumours of the new song’s imminent release started circulating last week, after a fan was reportedly told about it by frontman Axl Rose when the pair met backstage at a recent show in Atlantic City.
Hear the new track below.

The song can be streamed via your service of choice here.
Since partially reuniting in 2016 – with Slash back on guitar and Duff McKagan on bass – Guns N’ Roses have been touring actively; their Not In This Lifetime tour is currently the third-highest-grossing tour of all time.
Back in December 2020, Slash said he was hopeful that the band would be releasing a new album by the end of 2021. “We did a week of initial pre-production [on the Conspirators’ new album] and there’s 20 songs and we’re gonna start back up next year,” he told Cleveland.com. “I spent a lot of time writing and demoing that stuff.”
“And prior to that, Duff and I did some jamming and we also worked on the Guns record, and I’ve had a couple of ancillary recordings and jams on top of that, so there’s been a lot of stuff going on. I’m really not good at slowing down and just sitting around.”
He added: “I would like to think that we’d have some new stuff out next year – from both camps, I guess,” he said. “It’s hard to say, but I would like to think we’ll have stuff out next year.”
The post Hear Guns N’ Roses’ new song, Hard Skool appeared first on Guitar.com | All Things Guitar.