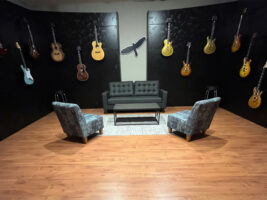 READ MORE: The PRS John Mayer Silver Sky SE is finally coming – and it makes a few key changes from the original

The showroom offers a selection of PRS’ latest guitar and amplifier offerings, which artists will be able to test or borrow when they go out on the road. Guitar tech work will also be available for qualified artists, making the showroom an all-in-one space for artists passing through Nashville or residing in the famously musical city.
Bev Fowler, PRS Director of Artist Relations, reiterated the new showroom’s purpose, saying in a press release that “The PRS Guitars Nashville showroom will provide an easily accessible, inspiring space for musicians to connect while fostering a deeper relationship between PRS and artists in the Nashville region.”
The showroom will be open to artists on Mondays, Tuesdays, and Wednesdays from 10:00 AM to 6:00 PM and by appointment.
Credit: PRS
In recent PRS news, the guitar makers recently revealed their 2022 lineup, including the highly anticipated Silver Sky alongside a handful of new models and updates. The lineup also includes the Private Stock Orianthi Limited Edition guitar, which is based off a one-off build from 2017. Notably, the Private Stock Orianthi Limited Edition was developed specifically to showcase the Private Stock’s maple tops, with a pink center that fades outwards to a purple.
Guitar.com recently reviewed the PRS SE Silver Sky, which earned a 9/10 score from writer Michael Watts. He praised the affordable version of the highly lauded Silver Sky as “a hell of a guitar that could easily be any player’s first choice”.
The post Here’s a look at PRS Guitars’ new Artist Showroom at Soundcheck Nashville appeared first on Guitar.com | All Things Guitar.