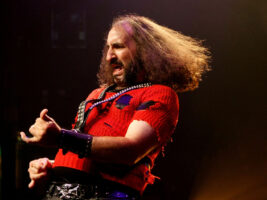 Here’s how to watch 2021’s US Air Guitar Championships

Air guitar is a rock ‘n’ roll tradition as old as time and, thanks to ESPN’s block of odd-sport programming known as The Ocho, is now a televised sport. The US Championships will be broadcast tomorrow (6 August) on ESPN2, at 6 PM ET / 3 PM PT.

The 2021 US Air Guitar Championship competitors submitted videos for regional judging. These were streamed across Twitch, where the performances were judged to select those competing in tomorrow’s final.
Competitors will face two rounds: first, a freestyle round will see them go bananas to a song of their choice. Next, the compulsory round springs a surprise track on the imaginary-guitar shredders, asking the top performers from the first round to improvise a performance.
Performances are judged on three criteria: technical merit, stage presence and ‘airness.’ Technical merit judges how close the performance is to the actual guitar playing heard on the song, stage presence judges exactly that, and ‘airness’ is a judge of the performers’ miming ability: that is, how well they convey the idea they are actually holding a guitar. Which they’re not. Doing so would probably be against the rules.
The winner of the competition will receive a free trip to Finland where they will represent Team USA at the Air Guitar World Championships.
To get a taste of the imaginary fretwork that’s to come, you can check out the Championship’s TikTok page to see some previous winners in action, and check out this year’s lineup

Other odd sports being showcased on The Ocho include Minecraft, Tetris, the 2020 USA Mullet Championships and the Franklin Rock River Stone Skipping Tournament.
The post Here’s how to watch 2021’s US Air Guitar Championships appeared first on Guitar.com | All Things Guitar.