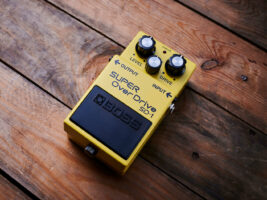 How to sound like IDLES, Real Estate and Black Midi using a BOSS SD-1

Ad Features with BOSS
Launched way back 1981, this year sees BOSS celebrating the 40th Anniversary of their legendary, industry-standard stompbox, the SD-1 Super Overdrive.
Used by musicians and guitar players the world over, the utilitarian SD-1 has quickly become one of the most ubiquitous pedals on the market today, used by a deluge of diverse and important artists from Johnny Greenwood and Josh Homme to esteemed Nashville session players. Indeed, it’s the SD-1’s simplicity and ease of use that has helped it become one of the most widely used and respected stompboxes on the market today.
With guitar bands once again being at the forefront of music, we’ve decided to copy the styles of some of the most influential artists of the modern era in Real Estate, IDLES and Black Midi using the SD-1, with the aim of helping you achieve similar guitar tones.
In this video, we’ve once again highlighted the SD-1s unrivalled versatility by using it as the basis of our guitar tone, aiming to help you sound like some of the most prominent guitar bands in contemporary music today.
Real Estate
Real Estate (Photo by Scott Dudelson/Getty Images)
In the first part of this video we’re emulating the guitar tones of New Jersey indie band Real Estate, famous for their liberal use of reverb and compressed, arpeggio melodies. Both frontman Martin Courtney and guitar player Julian Lynch have been known to use SD-1s in a live setting.
We’ve used the SD-1 as a simple preamp to add some colour to our clean tone, allowing the guitar melody to sit neatly in the mix. For additional character we included a customary RV-6 for some subtle reverberation alongside a CS-2 and Super Chorus for warm compression and vintage warble. Note the use of a hollowbody guitar to match the Coronado used by Julian Lynch.
IDLES
Lee Kiernan of IDLES. Image: Jim Dyson / Getty Images
Part two sees us jump into the world of everyone’s favourite British proto-punks, IDLES. Although both Lee Kiernan and Mark Bowen are known for their humongous pedalboards and array of boutique stompboxes, we’ve slimmed things down here by using the SD-1 as a boost to push our cranked tube amp into gnarlier territories.
Make sure you stack your gains for an extra level of distortion and attitude, and the addition of a delay pedal when playing your customary tremolo picking section will aid you in your attempts to imitate the visceral guitar tones heard on Joy As An Act Of Resistance.
Black Midi
Black Midi on stage (Photo by Kieran Frost/Redferns)
Finally, you’ll hear a jagged, percussive composition in the style of the Mercury Prize-nominated black midi. By pushing the drive knob on the SD-1 and using your guitars tone control, you can achieve percussive, sludgy tones reminiscent of those heard on Schlagenheim. Although we haven’t detuned to D tuning with a low C, the guitar is utilising Drop D tuning for a more sombre timbre.
The addition of a second dirt pedal helps when moving into heavier territories for that all-important feedback, and additional delay and modulation – in this case via the VB-2w WAZA Craft Vibrato – ensures your psychedelic, krautrock wig out is as authentic as possible.

Four decades on from its initial release, the BOSS SD-1 Super Overdrive still holds its own against the most expensive and boutique guitar pedals on the market. Whether you’re a fan of angelic indie music, political punk or even jazz-infused krautrock, the SD-1 is sure to find a place on your board, be that as a preamp, boost, or overdrive. Will there be another treadle pedal as accomplished, affordable, and colourful as this in another 40 years? It’s unlikely.
For more on the BOSS SD-1 Super Overdrive, visit boss.info.
The post How to sound like IDLES, Real Estate and Black Midi using a BOSS SD-1 appeared first on Guitar.com | All Things Guitar.