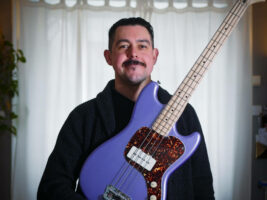 “I convince myself that if I play drunk, I’ll be more confident on stage”: Guitar Nerds’ Joe Branton on why playing your own songs doesn’t make you a bad person

The moment it all started
“My Dad was a second-hand car salesman, and he took an old Hohner Strat copy in part-exchange for something and gave it to me as a gift when I was about 12 or 13. I couldn’t play it at all. It had a Floyd Rose and weird active looking pickups… it was, and is, the opposite of everything I like about guitar, but it got me started and got me saving my pennies for something a bit classier!”

READ MORE: “I can make someone’s dream guitar come to life”: Julie Rosenberg on combining her love for music with her talent as a painter

I couldn’t live without my…
“I buy and sell an awful lot, and I often feel like I’m still searching for that one special guitar, but I think ultimately my simple 60’s reissue lacquer finish sunburst Jazz Bass. I’ve changed pickups in it three or four times, the plate has changed a bunch, I’ve sanded it, refinished it, changed the bridge, the tuners, changed them back! It’s like my experimental bass that I can do anything with, and I know it’ll still be a wonderful solid instrument. I’d hate to part with it. Not sure anything would ever be quite the same!”
The one that got away
“My 1979 Ibanez Roadster Bass. I sold it for something silly, like rent money, maybe 20 years ago. It was maple necked and fretless, and the strings had worn deep lines into the board the whole way down the neck on the A and D string. It was retrofitted with a DiMarzio Precision pickup in the neck and a Bartolini Jazz pickup in the bridge. That Bartolini was everything. Proper woody fretless tone! I loved it so much, I actually think those old late 70’s Japanese Ibanez’ are hugely underrated, such work horses!”
Joe Branton. Image: Press
My signature model
“Fidelity Guitars made me a signature model for the guitarist in my band, Poly-Math, maybe a year ago. At the same time, I had them build me a custom bass. Not a signature as such, but as close as I’ll ever come to one. It’s their Stellarosa body shape (like the old Japanese-made Stella Japonica). Short Scale, a single Mojo Pickups Dyna-Bass pickup in the middle of the body, and a Jaguar style flippable mute kit, to give me that vintage tone without needing to switch to a plectrum and palm muting. It’s finished in a light relic gloss black with a matching thick single ply gloss black plate, and the neck and board are a rich dark wenge. It’s a cracking bass for old school tones, not versatile or anything, and pretty much useless for any modern clean, clear bass tones, but for what I need it for it’s a slice of retro loveliness.”

The first thing I play when I pick up a guitar
“I’m a bit of a noodler, I don’t really know any other people’s songs, so whether I’m picking up guitar or bass, it’s always just a bit of a noodle for me. If I do play a song or anything it would just be one of my own, I’m afraid… does that make me a bad person?”
The best advice I’ve ever been given
“Probably from former Guitar Nerds host, Mark Packham, telling me to quit my job at the guitar shop we were working at and go full-time with Guitar Nerds.”
Poly-Math. Image: Poly-Math Bandcamp
My Spinal Tap moment
“I do this thing where I convince myself that if I play drunk, I’ll be more confident on stage. On the last tour we were playing some very new stuff. One particular song I start, and at a show where I’d definitely pushed my pre-show drinking limits, I started the song, and immediately realised I had absolutely no idea how the song went. It was awful. My band has a thing where we award points to each other for worst performance at the end of every show (the idea being whoever has the most awards by the end of tour buys drinks). I think they gave me 5 for that one. Outrageous!”
My guilty pleasure
“I pride myself on listening to a lot of avant-garde jazz, ethio-jazz, prog and math-rock… but my secret guilty pleasure is definitely early Blink-182.”

The first thing on my rider
“I’m a sucker for a Wagamama’s Kare Burosu ramen. Maybe a bottle of Park Cigar Blend Champagne Cognac, and a Vego chocolate bar!”
I wish I was there
“Predictably, Jimi Hendrix at Woodstock…. who wouldn’t say that!
If I could just play one thing
“I wish I was good at avant-garde jazz. One day I will be, I hope!”
Listen to the Guitar Nerds podcast here. The Cadaver Tomb Pt.2 by Poly-Math is out now.
The post “I convince myself that if I play drunk, I’ll be more confident on stage”: Guitar Nerds’ Joe Branton on why playing your own songs doesn’t make you a bad person appeared first on Guitar.com | All Things Guitar.