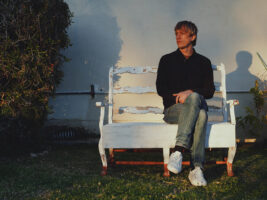 “I had to step up and pull out my small bag of tricks”: Steve Gunn ups his guitar game for sixth solo album, Other You

Other You’s gestation began in New York City with a Cordoba C5 acoustic. Gunn had begun kicking around ideas for a follow-up to 2019’s The Unseen In Between and emailed his friends at the legendary Chicago Music Exchange. “I wanted to have a classical guitar, I’ve never really had one,” he recalls. “I bought the Cordoba and it felt like it changed how I was writing.” Up on the roof of his house in Brooklyn, gazing out over the perpetual motion below with only his new nylon-strung friend for company, the Philadelphia-born solo artist quickly found himself writing what may be his strongest record yet.
Then came Los Angeles. In the winter of 2020, Gunn escaped the East Coast’s icy clutches and checked in to Mant Studios with veteran producer Rob Schnapf, admired for his work with Elliott Smith and Beck, and long-time collaborator Justin Tripp. This time, Gunn called on Reuben Cox’s Old Style Guitar in Silver Lake, borrowing an Aria AC30 he liked so much that it became the main acoustic on the new album, and the one he’s strumming on the cover. “It’s not expensive,” he explains, “just a solidly made Japanese Spanish-style guitar.”
Sure, there are far more valuable guitars on Other You – a custom S-type loaded with Lindy Fralin pickups made by Brian Haran’s Fret Sounds in Durham, North Carolina, Schnapf’s early-60s Jazzmaster and various vintage Gibsons, and a 1960 Martin D-28, but it’s the two humble acoustics that define Gunn’s most compelling artistic statement since 2014’s Way Out Weather.
“I’m really proud of this album,” he states, cradling the Cordoba. “I’m not trying to get too self-congratulatory, because that can be dangerous, but we were like ‘holy shit, we’ve just done what we set out to do’. We were psyched.”
One guitar not on the album is Gunn’s cherished 2014 Martin Special Edition 000-18. The ingrained anguish remains visible as he recounts how his favourite touring instrument got smashed in transit on a flight. While it’s since been patched up, the Martin has been usurped by a 1970 Guild D-35 – with a heavy-duty case. “That’s pretty much my primary guitar now,” he says, “there won’t be any more smashing involved.”

Finger food
Steve Gunn’s extensive guitar talents are of a curious, uncategorisable variety. His ornate, cyclical fingerpicking patterns and folky altered tunings co-exist with moments of near-virtuosic exploratory lead playing, evidence of a musical journey that has seen the 43-year-old immerse himself in blues, country, folk, punk, psych-rock and sprawling Eastern ragas. He’s a seasoned sideman and former member of Kurt Vile’s Violators, and away from his solo discography he’s made collaborative albums with – among others – Hiss Golden Messenger, Ryley Walker and the Black Twig Pickers, while fulfilling his experimental desires with the Gunn-Truscinski Duo.
Growing up in Pennsylvania, Gunn absorbed his older sister’s Cure and Smiths records, beginning his playing journey on an Alvarez acoustic, then an inexpensive Silvertone electric, before falling for a 1960s Fender Mustang. A teenage interest in skateboarding was accompanied by a soundtrack of punk and hardcore bands, but his first great transformative guitar icon was John Fahey.
“I kept gravitating towards him,” Gunn recalls. “His music was so different, it almost made more sense to me than other things. I started trying to decipher his playing and that was almost like a lesson in itself. His whole approach isn’t virtuosic, it’s more conceptual and based around different kinds of playing – classical, Indian raga and blues-based things, and that cracked open this whole other world for me. It coincided with my interest in learning about the blues, he was almost like a punk-rock renegade of the genre.”
A fiercely dedicated, self-taught bedroom student, Gunn was inspired equally by the playing of renowned folk adventurer Sandy Bull. “He cast a wide very net – classical, world music, experimental stuff, and to me he was almost more important than Fahey, it freed up my creativity. I never wanted to be learning modes and Van Halen scales, I was more of an exploratory player and I got really into the dexterity of playing. That music really spoke to me.”

Cosmic jam
Part of a rich seam of tasteful and inventive American guitarists sometimes bracketed together under the banner ‘Cosmic Americana’, Gunn feels a sense of kinship and common purpose with the likes of William Tyler, MC Taylor, Phil Cook, Walker and the late Jack Rose, another early role model.
“I’m friendly with most of them,” he says. “William is someone I’ve played shows with for a long time. We were coming into our musical journey at the same time and shared a lot of influences. I definitely felt a kinship with him and it still exists today. I know Ryley and love him dearly, he’s a very inspiring player. We all started in a similar way. We have our different styles, but if you go back and see where we all came from, it’s a very similar trajectory.
“I think coming from punk rock and being an aspiring guitar player, but looking for a different outlet for expression and being appreciative of blues musicians and guitarists from the UK who fused jazz, blues and folk, there was a point in our young lives when that music became very interesting to us and influenced our playing.”
Referring to himself as “still an aspiring songwriter in certain ways”, Gunn’s likeable humility and desire to collaborate sees two other improvisational greats, Jeff Parker and Bill MacKay, guesting on Other You.
“They’re two of my favourite guitar players,” he says. “I’ve been fans of theirs for a really long time. I’m so grateful they contributed, they have the ability to approach my music and interpret it in a way I’d never be able to. They pulled out sounds and changed the music in this really subtle and interesting way.”

Centre stage
Gunn has long been accustomed to inviting other guitarists onto his records, yet with this album recorded during lockdown, his own playing took centre stage. Parker and MacKay’s parts were contributed remotely and emailed to Schnapf in the studio.
“This album is rare,” Gunn says, “because the bulk of the guitar playing is me. I’m happy with how well-rounded it is. Sometimes when I’ve made records in the past, I’m in the room with two or three guitar players who can kick my ass and I’m like, ‘no you go in and play that lead’, but Justin was like, ‘no you go in and do it’. I had to step up and pull out my small bag of tricks. I’m really proud of that.
“On the song Fulton, there’s an open-ended sonic experimental part that just jumps out of the song, and that kind of expressive playing is a part of me, it’s reflective of the bands and music that I love.”
Gunn’s playing elsewhere on the record is equally accomplished. The mesmeric opening title track becomes a transcendent swirl, reverse delay and wah textures surrounding Gunn’s exploratory sketching. Sugar Kiss references his instrumental heritage, raked acoustic abstractions twining hypnotically around Mary Lattimore’s celestial harp song. The album’s centrepiece, Protection, started as a simplistic cyclical drone in open C written on the Cordoba. In LA, where everything ran through Schnapf’s Fender Tweed Deluxe and a 50s Ampeg Gemini, it was transformed into a freewheeling lead masterclass. “Rob plugged me in with a Jazzmaster to the Echoplex and we just went to town on it,” Gunn recalls. “The whole album was a blast, but that was particularly fun.”
Alongside the dusty old Echoplex on Gunn’s studio board was an Art Van Delay made by Australian stompbox company Bondi Effects, a Strymon El Capistan, a Mu-Tron Bi-Phase and a wah from Oregon’s Real McCoy Custom. With an enviable array of gear at his disposal and such a convivial and productive working relationship, Gunn feels he’s made a record as nuanced and well-crafted as anything in his lengthy discography. His varied and illuminative guitar work is the culmination of 30 years’ study. His songwriting is as personal and emotionally naked as it’s ever been and, crucially, a once reluctant singer has blossomed into a gently brilliant vocalist, suggestive of both Philadelphia soul and country records of a certain vintage. Is this his finest work since Way Out Weather?

“My whole intention was to get back to the kind of state I was in back then,” he says. “I was in a very comfortable place and it’s almost as if I didn’t know what I was doing, so I wasn’t trying to do anything I couldn’t – existing in my own abilities and living in that space. From the first conversations about this record with Justin, that’s what we wanted to do. We had nothing to prove and we wanted to get back to the openness of Way Out Weather.
“I came out of my shell and it just felt right. I’ve improved quite a bit, particularly with my singing and everything aligned itself in a very natural way.”
After 15 years of making records, the pause for reflection imposed by Covid-19 helped Steve Gunn refocus. His voyage in guitar playing continues and on his sixth album he sounds lighter, refreshed and ready to begin another chapter of his career. Despite amassing a richly diverse body of work that stretches well beyond his six solo albums, he’s enjoyed the relative luxury of being a full-time musician only since 2015, and he’s aware of the futility of getting too hung up on notions of success. Other You, is, he says, a record chiefly for other people to enjoy.

“I’ve learnt not to be so invested in my own expectations and to just always be inspired and aspiring, keep working, keep playing, because that’s what’s most important to me, gaining something from musicianship. One of the most enjoyable aspects of making records is offering the music to others for their edification and enjoyment. If you’re in a good place and music is real and not this posturing kind of thing, I feel like people can hear that, it’s palpable. For me, I’ve felt like this record is more palpable than others of mine.
“I’ve worked some shitty jobs over the years and sometimes I have to check myself. If I’m on tour, struggling to drag my guitar case and suitcase into a bathroom at an airport and feel like I’m a victim of my own world, I have to take a step back and appreciate what I’m doing, and I do. I really do.”
Other You, by Steve Gunn, is out 27 August on Matador.
The post “I had to step up and pull out my small bag of tricks”: Steve Gunn ups his guitar game for sixth solo album, Other You appeared first on Guitar.com | All Things Guitar.