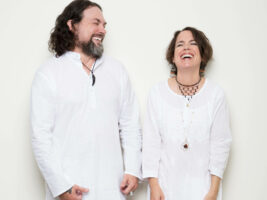 “I think if I stop and analyse things too much, it could fuck it all up” – Greg Anderson on his collaboration with Petra Haden, Devotional

“Ever felt a sound?” asks what was once an advertisement for the Sunn amplifier company, now co-opted as merch for Sunn O))). It’s a fitting mantra for a band that focuses on rumbling drones conjured by piles of 100-watt amps. These drones have always provided a fertile base for collaborations with numerous left-field artists: and now Greg Anderson (electric guitar stage right) has brought the collaborative touch to his solo project The Lord.

READ MORE: Sunn O))) are selling their own personal collection of gear in new Reverb shop

Devotional is a collaboration with vocalist and violinist Petra Haden. Anderson and Haden had worked together before, over 20 years ago now. She played on the second record from each of Anderson’s two best-known projects: Goatsnake’s Flower Of Disease and Sunn O)))’s ØØ Void.
Devotional, however, draws more on Sunn O)))’s freeform nature than Goatsnake’s stoner doom. And, similar to Sunn O)))’s many previous collaborative efforts, the record is centred around spur-of-the-moment decisions. “The actual work before recording was extremely minimal,” Greg says. “Petra is an absolute master of improvisation. I mean, it’s in her DNA: her father is Charlie Haden. It’s definitely been passed down. And so for half of the album, she asked me not to send her the demos, or any ideas at all. She just wanted to show up and react to what I’d recorded.”
“The album is two different sessions. Side A was recorded in December of 2020. And Site B was recorded in April of 2021. So for Side A, she had listened to the demos and she’d asked for them. And then for Side B, she just wanted to react to it. It’s interesting because side B is my favourite – and that was the one where there was no prep work. Nothing done beforehand. She was listening to those ideas and those riffs for the very first time ever in the studio and reacting to it. We did very little editing, we cut some things, looped others, but it was pretty rare.”

But despite the lofty imagery drawing on spiritual enlightenment, Greg is clear that the point of bringing these references in is not to take a shortcut to some deep, philosophical point: “I’m not trying to convey some message: it’s more just inspired by the aesthetic. There’s also just the kind of the controversy of it all, especially the Rajneesh – there’s sex drugs and murder involved in something that was supposed to be so peaceful and positive. And then it gets this very, sort of sinister and dark twisted side to it.”
The combination of blissfulness and a dark heaviness is a musical avenue that suits Greg. “It’s something that Sunn O))) has really been focusing on the last couple years. We made all this really dark music over the years – or what can be perceived as dark – and with the Life Metal record, we wanted to bring some light to it. Devotional is an extension of that.”
Greg says he avoids over-analyzing what he calls his own “caveman spirituality.” “There’s no – I’m not like a deeply religious person,” he says, cautiously. “I don’t really define it: If anyone ever asks me about spirituality – my extent of spirituality is creating music and being involved in music, I just haven’t really ever thought about it. For better or worse, you know?”
This touches on something broader about Sunn O))): “It’s unorthodox,” Greg states, “what we do, what we create – people have these really varied experiences with it. A lot of people use Sunn O))) for meditation or helping them sleep or whatever, and I always feel like there’s an obligation to reveal some really deep meaning about how we do it. Why we do it. But for me, I just do it because I like it.”
“It’s like how rehearsing can work against you,” Greg adds. “I’ve been in bands where you practise too much, and you just ruin it, you ruin the spark and what you like about it, it turns into something that’s not pleasurable. So sometimes, I think if I stop and analyse things too much, it could fuck it all up.”
Devotional is out now on Southern Lord.
The post “I think if I stop and analyse things too much, it could fuck it all up” – Greg Anderson on his collaboration with Petra Haden, Devotional appeared first on Guitar.com | All Things Guitar.