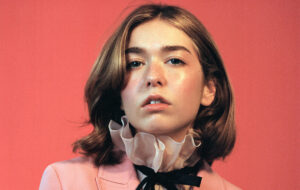 “I want to be level with the people that I’m making music for”: Snail Mail on ghost writers, representation and new album Valentine

“It means independent, you know?” Lindsey Jordan has some thoughts on the current state of indie music. In the essay that accompanies the release of Snail Mail’s long-awaited second album, Valentine, Jordan’s friend, the artist Katie Crutchfield (aka Waxahatchee) is at pains to point out that every one of the album’s 10 songs was written by her alone, “in an era in which ‘indie’ music has been reduced to gentle, homogenous pop composed mostly by ghost writers”. And if you read that with a sharp intake of breath and a wince, you’re not alone.

READ MORE: “We were known because we didn’t have choruses, now I enjoy that”: The War On Drugs Adam Granduciel embraces pop on I Don’t Live Here Anymore

“It’s just so strange to me that we’re at a time of ghost writers and shit,” Jordan explains via Zoom from her cosy New York apartment, guitars precariously balanced on stands in the space between the couch and the fridge. Her music might have a weary old soul quality to it, but she’s a bubbly and gregarious interviewee, her hands gesturing animatedly as she gets caught up in her point.
“With the least shade intended possible,” she continues. “I just take a lot of pride in the fact that I don’t have any help. I feel like it’s part of the genre. It’s not my place to say what people should and shouldn’t do. I just think that, if you’re gonna qualify it as indie, it should almost be a separate category – people that write their songs and people that don’t. I think it’s such a genre-defining difference, because it’s the hardest part.
“It feels crazy to me, to be on an independent label or something if you’re just performing the songs for an indie crowd – what, you’re like a performer, but not a writer, not an artist? I don’t know, it just feels like why even take the job if you don’t want to do half? If you call yourself a singer-songwriter, you might as well be a singer and a songwriter, you know? I take a lot of pride in the songwriting element of it, and that’s why I like to do it.”

Road warrior
Still just 22 years old, Ellicott City, Maryland native Jordan was barely 17 when her EP Habit catapulted her into the indie-rock big time, a deal with Matador quickly followed and her debut album, Lush followed two years later. Within no time the word “prodigy” was being chucked around, and the album would make year-end lists in Rolling Stone, Pitchfork and everything in between.
And then there was radio silence, asides from recording a version of Pristine in ‘Simlish’ for the videogame The Sims 4, Jordan hasn’t put out any new music since 2018 – quite a thing in an industry that normally expects a regular drip-feed of new singles to populate playlists and keep a young artist in the zeitgeist. But Jordan had other priorities – while her friends back home were finishing high-school and heading off to college, Snail Mail was relentlessly touring, giving her a limited amount of subject matter from which to pull new material.
“I didn’t want to write the second record about tour,” she explains “Because it’s just not relatable to anyone but me and my bandmates and other people on tour! I think it’s like, a thing, y’know? You have success on your first album, then the second one is about tour. I was like, ‘I don’t wanna do that’, but that was all I had experienced for several years – not love, not heartbreak, nothing literally just tour! I don’t want to be up here, and my audience is looking up, you know? I want to be level with the people that I’m making music for.”

Snail Mail was in many ways a happy accident – Jordan had no intention of being anything other than a guitar player until she started writing her own songs around 13, and at 15 realised that she needed to get them out there.
“I wasn’t a singer, I was just a guitar player for my whole life,” she says. “And then once I started writing songs, I was like, ‘Who’s gonna sing these? I guess me!’ That’s how I started – just to accommodate the fact that I wanted to play guitar. And now we’re here – guitars, keyboards and all this! Who would have known?”
Jordan cites Nirvana, Oasis and Elliott Smith as the artists that inspired her to start making music herself, but just as important was her introduction to the DIY scene in Maryland and nearby Washington DC.
“There was a point where I discovered DIY shit and going to house shows – I think realising that was doable was a big thing,” she explains. “Then I formed a band I was like, ‘Cool we can just do that’ – I was never like, ‘Oh, let’s take it from there to here’. But pretty quickly those shows were going really well, and people were reacting strongly to it. People in Baltimore and DC were pulling up to these little dive bars we were playing.
“The first tour we ever did, we were opening up for another pretty DIY band, and I remember that Jeff Mangum was one of the shows. And I remember just thinking, ‘Well if Jeff Magnum is here, this must be going really well!’”

Offset expectations
Jordan’s first guitar was a three-quarter-sized red Squier Strat, her guitar collection in the years since has blossomed and grown to the point where she has various instruments stowed at her parents’ house, Snail Mail’s rehearsal space near DC, or at her bandmates houses. It speaks to a musician who isn’t overly sentimental about her instrument, and instead sees them more as tools for the job…
“Tools for the job!” she repeats back to us, chuckling. “I think I could have gotten to the point where I was sentimental, but I’m lucky in that I’m doing stuff with Fender, and so I have a collection that rotates a lot. There’s a lot of diversity in this set, tone-wise, and in terms of specific needs, and so I’m doing a lot of rotating, and seeing what we need.
That doesn’t mean that Jordan isn’t extremely particular about her guitar sound, however, far from it…
“I do like to get into the tone zone!” she exclaims. “It’s important to me, but I have a lot of people around me that I enlist to help. My bandmates and I spend a lot of time dialling together, but they’re more interested in it so at the end of the day, I do care but they’re better at getting from A to B so I will be like, ‘Let’s work on this all of us…’ because I don’t really I don’t have enough interest in it to get super well researched. It’s the same in the studio. I feel like I’m okay, but I’m sure the engineer knows a lot more and cares a lot more about tone, so I’ll work with him on getting from A to B, but I don’t care enough to like, educate myself – there are so many other things that I care about!”
“the thing that’s really magical about this moment in time is that young kids are able to have heroes that are like them”
When it comes to instruments, her current primary guitars blend the vintage with the modern, her trusty ’71 Gibson SG rubbing shoulders with a short-scale Fender Malibu acoustic, and an orange Jazzmaster that came to her out of the blue, but has rapidly won her heart.
“I got kind of randomly,” she says. “I’ve actually never had a Jazzmaster and Fender just sent it to me. I don’t really know what’s good with it yet, but it’s really cool. I did a custom Jazzmaster with Fender that was supposed to be my number one. It  took over a year to make, and then they sent it to me and… it just never arrived! So they’re making me another one, but for now I’ve got this other one now that they just sent to me – I don’t know shit about it, but it’s somehow the best sounding guitar I’ve ever played! I didn’t know what to expect from it and I picked it up in a band practice just to test it out and I was like, ‘What the fuck? It’s awesome!’”
Image: Tina Tyrell
Style council
With most of her life spend learning guitar in one form or another, it’s no surprise that Jordan has confidence in her chops, and enjoys making music that might seem simple to untrained ears, but is deceptively complex. It’s a facet that makes her guitar style tricky to imitate, though plenty have tried.
“Not to sound super self-assured in that way, but I definitely think that my guitar style is not as emulate-able as it seems,” Jordan says. “I definitely think that some people are trying, but I don’t necessarily think they’re doing the same thing.
“Saying that, Snail Mail and Soccer Mommy came out at a similar time, and I think that we’re doing similar things that come from similar inspirations on guitar. Sophie [Allison] is not trying to emulating my still obviously, but I think her stuff is coming from a similar inspiration, and so we do similar things at times. Like that song, Still Clean for example, we’re messing around on the neck in a similar way and I’m like, ‘Respect!’”

Snail Mail and Soccer Mommy might be two of the most exciting young talents in indie-rock, but they’re certainly not alone – whether it’s Julien Baker and Lucy Dacus, or Phoebe Bridgers and Mitski, increasingly the most important voices in indie-rock have been women, and often queer women at that. It’s a long-overdue change, and one that Jordan clearly feels will have a wide-reaching impact.
“I think the thing that’s really magical about this moment in time is that young kids are able to have heroes that are like them,” she explains. “There’s so much more representation. And it’s obviously an uphill battle at all times, and it’s still a thing that’s growing and changing. But I think the thing to get excited about is the fact that it creates a pathway for more people to do it who maybe wouldn’t have been able to before, and that’s dope.
“I always think having that kind of representation is cool. I didn’t have that, so it’s cool to be a part of something like that. And it’s nice to see the gates opening a little because it is such a gate-kept world – it’s something to celebrate for sure.”
Valentine is out 5 November on Matador.
The post “I want to be level with the people that I’m making music for”: Snail Mail on ghost writers, representation and new album Valentine appeared first on Guitar.com | All Things Guitar.