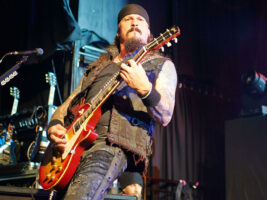 Iced Earth guitarist Jon Schaffer had “urine and faeces” thrown at him while in jail, lawyer says

The lawyer for Iced Earth guitarist Jon Schaffer, who is facing federal charges for his role in the US Capitol riots of 6 January 2021, has described the “two months of hell” he faced during his imprisonment earlier this year.

READ MORE: Iced Earth’s Jon Schaffer is on FBI’s “Most Wanted” for storming US Capitol

In April, the guitarist was initially charged with six crimes, including engaging in an act of physical violence and targeting police with bear spray. He pleaded guilty to two charges, admitting to the obstruction of an official proceeding, as well as entering and remaining in a building with a dangerous weapon. He faces a recommended sentence of 41 to 51 months in prison.
Schaffer’s lawyer Marc J Victor has told a federal judge that the musician had endured “two months of hell” at Indiana’s Marion County Jail before he was transferred to the District Of Columbia in March, when the charges were filed against him. The comments came during a detention hearing in the US District Court.
“My client, who is presumed innocent, has just gone through two months of hell where other people were throwing faeces at him and urine at him and threatening his life in a horrible, horrible situation,” he told the court. “I think this got his attention, Judge,” Victor said, adding: “He’s aware this is a serious case.”
In response, Judge Zia M. Faruqui said: “That’s obviously unacceptable, flatly. I share your feelings of anger that this is not how our criminal justice system is to work.”
Schaffer is currently on conditional release having agreed to cooperate with ongoing investigations into the US Capitol storming. The plea deal reportedly involves Schaffer being questioned about his ties to the far-right militia the Oath Keepers. He was described as a “founding member,” and was seen wearing a baseball cap with the words “Oath Keepers Lifetime Member” when inside the Capitol building.
Following the news that Schaffer was involved in the deadly riots, his Iced Earth bandmates Luke Appleton and Stu Block left the band. Hansi Kürsch also split from Demons & Wizards, his duo with Schaffer – effectively disbanding the group.
The post Iced Earth guitarist Jon Schaffer had “urine and faeces” thrown at him while in jail, lawyer says appeared first on Guitar.com | All Things Guitar.