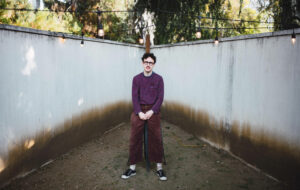 You may recognise Harrison Whitford as the guitarist in Phoebe Bridgers band or for his work with Matt Berninger of The National. Yet, the LA-based guitarist also has a discography of his own that deserves mention alongside his more high-profile gigs. In 2018 he released his debut album Afraid of Everything, a collection of songs that were written gradually between the ages of 17 and 21. On his new album Afraid of Nothing, the songs have had a similar gestation period.

“I’ve written a lot less in the past five years. I don’t write songs just for the sake of writing them, I write more when I feel like it these days” Harrison states. This is typical of an artist upon which there is no onus to actually create outside of his collaborative work with other artists. Harrison Whitford is in a position where he can create music simply out of a need to express himself, there is no deadline, no expectations, the songs come in the right moments.
His path into playing the guitar was perhaps already set for him – his father is Aerosmith guitarist Brad, while his brother Graham plays with blues-rock titan Tyler Bryant.
“My dad plays, my stepdad plays, my brother plays so I was around a lot of guitar players, and they were all predominantly rock musicians,” he explains of his musical upbringing. “That music influenced me early on, Hendrix is still one of my biggest influences. Jeff Beck was definitely my hero throughout middle school but at some point, when I got more interested in song writing I got into guys like Ted Green and Adam Levy and those really musical, thoughtful guitar players”.

Being surrounded by guitar players from an early age was especially helpful for Harrison to get guidance on his playing, yet there was always a sense of resistance from him to pick up the instrument, but he remembers the exact moment when his brain switched gears forever.
“I started when I was 12,” he reveals. “A friend of mine was getting a bass lesson and I can still remember that for whatever reason I just wanted to go sit in on that bass lesson. He was learning Smoke on the Water and then I went home that day and I played it on my brother’s guitar”.
From then on he’s been on a one-track trajectory of playing the guitar. After playing for so long and giving so much of his time to the instrument, Harrison now finds that he has reached a place where a certain balance is needed to get to his best work.
“Something that helped me a lot was finding the balance between wanting to get better but also not taking that too seriously,” he says. “You have to let go of the idea of progress in general, the only time you really notice that you’ve made progress on an instrument is when you look back at your old work. It’s like a high wire act of not going too over the top with beating yourself up about getting better to the point where you don’t want to play but also pushing your limits in subtle ways”.

Nothing doing
Afraid of Nothing is an album that seems to exist within its own microcosmic world. It’s one where you’ll find little in the way of hooks or riffs, instead this is an album where the guitar is essential to world building. Across an album of self-examination that picks up pieces of the past, you’ll often feel as if it is backlit by a sky of grey.
Take Salvation Army, which in its overcast and almost mournful state manages to engulf you in feelings of remorse and inevitability. Subtlety is key, the right placement of distortion produces a shudder-inducing wail, in this carefully constructed album Whitford seems to know exactly how to summon the right tone and place the right note.
There’s also a certain sense of loneliness that can be found throughout the record, an aspect that has filtered through from the recording process itself. Yet, as Harrison admits being relatively in isolation is actually a driver for his creativity.
“Having that alone time is hugely vital to me, just thinking about something I’m working on, not feeling distracted and having the time to be focussed,” he affirms.
You can tell that he has had the time to tinker with these songs for as long as what was necessary. “Certain songs on the record, I made like four or five versions of them,” says Whitford. “But rather than discard them completely or give up I just kept trying until I found a thread worth chasing. I think some of my favourite stuff on the record were things that I was close to throwing away”.

Is Harrison guilty of perfectionism? Whitling away at songs until they’ve come to fruition just as he imagined them?
“I don’t know if it’s perfectionism” he begins. “Anything I’m working on creatively; you want to have an instinctual feeling that the whole thing feels right in a certain way. It’s that unnameable thing you just get a feeling that it’s the right version of it. There’s a certain point where you do just have to let it go”.
Whilst we chat, Whitford has been strumming a guitar between sentences and upon lifting it up he reveals it to be a 64’ Gibson ES-140. “I first got hooked to this guitar when I was making Phoebe’s first record, her producer Tony Berg has a couple of them.” He adds. “I use this on the song Salvation Army, I was going through this little battery powered amp I have that can sound really nasty and warm, I put it in my bathroom to record”.
The Gibson wasn’t the only tool at Harrison’s disposal when recording Afraid of Nothing, including a couple of different Telecasters, one of which was a Nash Telecaster.
“I used my friends Gretsch 6120 on Linoleum. I used a lot of rubber bridge guitar, there’s a guitar shop in LA called Old Style owned by a dude called Reuben Cox. He just takes an old Harmony or Silvertone and he puts a rubber bridge on, it just has this dead, cool sound where it almost kind of becomes a different instrument”.
In terms of pedals, there were a few which helped to guide the sound of Afraid of Nothing, including the Strymon Flint and the Deco. “The Digitech Digiverb I use quite a bit,” he says. “It has a really amazing room reverb setting and a really cool reverse reverb setting. There are a fair amount of tracks where I would just plug a guitar right into the preamp and just use that sound because I’ve always loved all those George Harrison (kind of) sounds”.

Take it easy
Harrison has spoken about taking a more relaxed approach to playing guitar, to find the right balance. There’s only one part of playing the instrument that he has a particular focus on.
“The most conscious goal I have ever had with the guitar [is to be like] my favourite players were when they were picking up an instrument – it was never like they were playing licks or riffing, they were just making music,” he explains.
“That seems to be something that’s lost a little bit on guitar, I was always really inspired by guys who picked it up and were really musical. I suppose that’s something I’ve been conscious about for a while”.
This preference for chord progressions and playing more based off a feeling is reflected in Harrison’s solo work, it lends incredibly well to the sense of personality that is soaked into the walls within Afraid Of Nothing.

Within his time as a guitarist Harrison has been fortunate enough to meet many other like-minded musicians. You can hear him lending his talents to not only Matt Berninger and Phoebe Bridgers but others such as Christian Lee Hutson, Ada Lea and Noah Gundersen. Being surrounded by other musicians so often is surely a place where creativity thrives. How do these spaces help you grow as a musician?
“I learned how to collaborate and I’m super fortunate to be surrounded by musicians who are great people but also people whose musicality inspires me,” Whitford says. “You learn many different things; you hopefully take something away from everybody so it’s hard to pin it to one singular thing other than listening better. That’s so integral to being a musician is improving your listening”.
Harrison has spent a lot of time as a session musician, what advice would he give to those looking to take a similar path? “Work on your thing. Don’t stress too much about networking or meeting the right people. Always lead with the music and getting better at playing because that’s your only form of currency”.
Afraid Of Nothing is out now on Screwdriver.
The post Introducing Harrison Whitford… Phoebe Bridgers “secret weapon” with an unimpeachable guitar pedigree appeared first on Guitar.com | All Things Guitar.