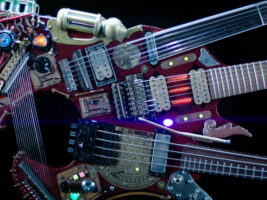 Ibanez and Steve Vai have teamed up to officially launch the Hydra, a multi-necked guitar that’s perhaps the most excessively-spec’d instrument we’ve ever seen. In the spirit of excess, an NFT of the launch video is being auctioned off to celebrate the guitar’s existence.

The Hydra itself features an absurd array of features. There’s a 12-string neck that’s fretless from around fret eight, with a humbucker, a piezo and an active-sustaining pickup. The middle neck is a seven-string, with two humbuckers, a floating vibrato and what looks to be 24 frets. The final neck is a bass neck, with a fretless fingerboard underneath the two lowest strings, and a fretted board underneath the two higher strings.
Additionally, there is MIDI output, and 13 sympathetically-resonating harp strings towards the back of the instrument. The volume of each part of the guitar can be adjusted with an array of sliders and knobs found all across its body.
At this point in the rundown of the features, things get a little more nonsensical. We don’t know what the glowing “seducer” does, or the “dragonizer” switch, or the set of tubes Ibanez and Vai have labelled as the “climax regulator.”

Vai said of the guitar: “We absolutely respected this instrument by having the brilliant Garson Yu and his team at yU+co create this phenomenal Hydra reveal video. The guitar geek in me is stunned every time I see it. This video captures the splendor and mystique of the Hydra in intimate detail.
“The conception and construction of the instrument was a monumental feat of creativity by a whole group of inspired people, and I could not be more happy with the way this video came out. Imagine being a half an inch tall and exploring the Hydra as an adventurer. It would be like exploring an alien planet. Sign me up!”
Alongside the launch of the reveal video, Vai has announced that on 28 January, the same day his new album Inviolate lands, a one-of-one NFT of the Hydra’s reveal video will be auctioned off via OpenSea. The NFT will also feature exclusive bonus content that will be unlocked to the buyer.
The NFT has been minted on the Ethereum blockchain, which makes use of the highly energy-intensive Proof Of Work technology. Estimates vary for the carbon impact of minting and selling an NFT using Ethereum, however some place it at over 128 kilograms, similar to driving a car hundreds of miles. As of January 2022, the entire Ethereum blockchain uses around the same amount of electricity as the Netherlands.
Bidding for the one minute and 39 second video, and the bonus content, has been set at 1 ETH, which is roughly equivalent to $3,100. The buyer of the NFT will not receive a physical instrument.
The post Is this the most excessive guitar ever made? Ibanez and Steve Vai unveil the triple-necked, vacuum-tube-equipped Hydra appeared first on Guitar.com | All Things Guitar.