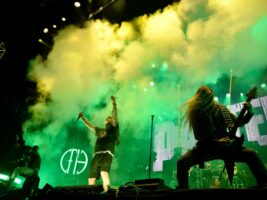 It is “entirely possible” that the new Pantera lineup will release music, says producer

Pantera’s producer, Sterling Winfield, thinks it is “entirely possible” that the current lineup will release new music together. However, he doubts whether it should be released under the same band name.

READ MORE: Pantera producer says choosing Zakk Wylde for the reunion was a “no-brainer”: “He knew Dime better than any other guitar player on the planet”

The producer made the comments in a new interview with Reckless Rock Radio where he shared his feelings on the band’s reformation.
When asked about the possibility of the four-piece – who are currently performing pre-existing Pantera tracks – releasing new music together, Winfield stated that the topic has not been discussed yet, although there is a possibility of it happening later down the line.
“It’s not unheard of, it’s not blasphemous. I will say that it is entirely plausible,” he said.
“It is entirely possible, but at this point in time, I don’t know that anybody’s looking that far down the road. They’ve got a world tour to tackle for the next two years… [but] could it happen? Yes.”

Although quick to confirm that there are no current plans installed, Winfield did say, if new music was made, he wouldn’t feel ‘comfortable’ with it being released under the same title.
“It depends… it has to be done right,” he responded when asked if he’d approve of them releasing new material.
“If it were to happen, I would not feel comfortable calling it Pantera. I don’t think that would be classy. I’ll put it that way and I’ll just leave it at that for now. [But] this lineup could make some very badass music. And the music is all that matters.”
Elsewhere in the discussion, the producer gave another reason why new music may not be released under the same name.
Here, he explained that surviving members, Phil Anselmo and Rex Brown, have changed since they were part of the original lineup, and would likely have a different sound.
“[They] are different people now. They are not the same people from 20-something years ago,” he explained.
“You mature. You grow up. You own your mistakes. You move forward in your life […] that’s exactly what I see [happening] here.”
The post It is “entirely possible” that the new Pantera lineup will release music, says producer appeared first on Guitar.com | All Things Guitar.