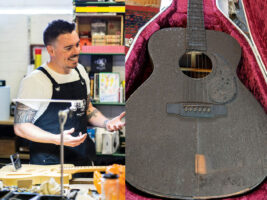 “It was like a burned match!” How a UK luthier brought Ed Sheeran’s fire-damaged guitar back to life

Generally speaking, fire and guitars don’t mix, and that certainly seemed to be the case when one of Ed Sheeran’s most cherished guitars – a Martin Eric Clapton model given to the Grammy winner by the man himself, and signed ‘For Ed, love Eric’ on the back – was caught up in a studio fire.

Pulled from the wreckage, to any normal person, the guitar looked like a write-off – blackened and burnt from melted strap button to charred headstock, it was only recognisable as a guitar by shape alone. But the good folk at Monty’s Guitars like a challenge, and over a year of toil, they remarkably restored the guitar to its former glory – and thanks to an unplanned bit of torrefaction, the guitar sounds and plays perhaps better than ever.
We caught up with Monty’s main man Matt Gleeson to get the inside story on how this uniquely challenging project happened…
The transformation of this guitar from where it was to what it became is incredible – how did it all come about?
The guitar as it arrived.
Starting out: the guitar as it arrived“It was through a guy called Joe Rubel, who is this engineer, producer and writer who works really closely with Ed. He phoned me up and asked if I would be up for doing some crazy restoration project, and I was like, ‘Yeah I’ll give anything a go!’
“Because this guitar meant so much to Ed, and because Ed had helped Joe so much and given him a life-changing job basically, he wanted to do something really nice for him. So his initial idea was that he was going to buy another Eric Clapton Martin, and then we were going to swap the backs over, because the back was a little bit blistered. But when he gave it to me, I scratched a bit of the surface off and you could see that there was still good wood under there and it hadn’t penetrated all the way through. So we said, ‘Oh well that’s one option, but wouldn’t it be great to reflect the story of what the guitar’s been through and actually give him the same guitar back?’
“So one of my guys, a guy called Tim Hughes, he sanded it all back and got the damage off, and removed all the bits that were gone – all the binding had gone and all the plastic work had gone. But I managed to get through to Martin and after some to and fro, they agreed to send me over some replacement binding and all the parts so we could put it all back together, so that was really good of them.
The binding had to go, as well as the frets and a good portion of the burnt top.
“Some of the restoration work was a bit above my pay grade, but luckily a guy had just started working for me, Kevin Williams, who was an expert luthier and would build acoustic guitars from scratch. Because putting the binding on a new guitar is easy… putting a guitar that’s been burned is really not! When lockdown started I encouraged him to use the time to start his own thing, and he’s building under the name Providence Guitars now.
“So he put all the binding back in, and then we sprayed it, put the bridge back on: it was all just a really interesting experience. It’s probably the biggest restoration job I’ve done. We did a load for Elvis Costello once when his warehouse got flooded in 2003 or ’04, which was similar… but this was much more… it was like a burned match!”
So you didn’t have to replace any of the wood? Not the headstock or the fingerboard? Because it looked a mess…
Starting out: the guitar as it arrived
“Nope, not a thing. And it was a mess, but you know what, hats off to the build quality of those guitars. Because all the struts inside were fine – we had to glue a few back, but mainly it was fine. So in some ways, my job was quite easy – it could have been a lot more tricky if it was an old Gretsch or something, that would have been… [laughs] But it was really, really cool, and a whole team effort, really.”
And probably not something that you’re going to be asked to do again, you’d imagine…
“Yeah potentially it’s once in a lifetime… or maybe that will become my thing! But y’know what, it sounded amazing! When you tone-tapped the top it was really nice and light – and let’s face it, the whole guitar had been roasted, so it sounded really good!”
You’ve obviously refinished the guitar, but the top still looks a little bit burnt, was that intentional?
All done: the finished product
The back of the guitar, which was the most intact part when it arrived.“Yeah, I didn’t want to take the wood down too much more, and I think part of it is the story of it. That guitar has had some life! And I think it actually looks better than a standard one.”
Did you get any feedback from Ed or Joe about the guitar once you’d finished the job?
“I’ve never spoken to Ed directly, but Joe gave it to him and he was blown away – he didn’t know anything about it. But we couldn’t say anything about it, because Joe didn’t think Ed would want to talk about it, but then he spoke about it recently on a YouTube show [Ed talked about the guitar on First We Feast’s Hot Ones show] and then Joe texted me when that was live to say, ‘He’s talked about it, so you can talk about it now!’ [laughs]

“It’s one of those things that I’ve just been sat on – I have all the pictures in a folder on my computer ready to go!
“Whether it was for Ed Sheeran or Joe Bloggs, it’s something that I’m really, really proud that we as a company could do it. And it took over a year – just because of various things, like going back and forth with Martin, and the spraying took a long time because it just ate up lacquer! You put it on and it was like a sponge! But it’s one of my proudest moments.”
Take a look at some more in-progress shots of the guitar’s journey below.

Starting out: the guitar as it arrived

Starting out: the guitar as it arrived

The top finish comes off, as well as the frets

The top finish comes off, as well as the frets

The binding had to go, as well as the frets and a good portion of the burnt top

Here’s the finished headstock, next to how it began. Can you tell which is which?

All done: the finished product

For more information about Monty’s Guitars, visit montysguitars.com.
The post “It was like a burned match!” How a UK luthier brought Ed Sheeran’s fire-damaged guitar back to life appeared first on Guitar.com | All Things Guitar.