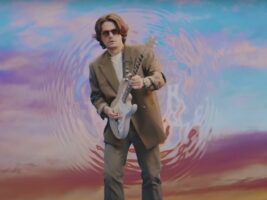 John Mayer has released a music video for Wild Blue, a song from his latest album Sob Rock.

Continuing the ’80s nostalgia for the music video of the title track, Last Train Home, the video for Wild Blue is trippy and light-hearted. Dressed in a brown blazer, cowboy boots and shades, Mayer casually plays the Moc Sand Satin (Rosewood) edition of his signature PRS Silver Sky, alone in his own carefree, psychedelic world – thanks to green screen and nature-heavy imagery.
Watch it below:

Mayer released his eighth studio album last month, and gave live performances of Last Train Home and Shouldn’t Matter But It Does on late night TV. The latest edition of the PRS Silver Sky, the Roxy Pink, was first spotted at the former performance.

READ MORE: How to play blues like John Mayer

The tongue-in-cheek video for Wild Blue aligns with Mayer’s previous comments about Sob Rock. The guitarist told Zane Lowe last month that the album is “a shitpost” – meaning the internet tradition of uploading deliberately and ironically unfunny, inane and poorly-made memes.
“More importantly, it’s what I thought was a shitpost,” he said. “And this gets down to where you have artists sit down in front of you and play you what they think is their garbage, and you go ‘that’s the best thing I ever heard you play.’”
Mayer is currently on a tour with supergroup Dead & Company that kicked off Monday (16 August) in North Carolina. The band will enforce a requirement for proof of either vaccination or a negative COVID-19 test on the US tour.
Mayer will also embark on a 2022 tour for Sob Rock, which is set to kick off on 17 February in Albany, New York. Tickets for his 2022 tour can be purchased here.
Sob Rock is out now on Columbia Records.
The post It’s just John Mayer and his PRS Silver Sky in trippy music video for Wild Blue appeared first on Guitar.com | All Things Guitar.