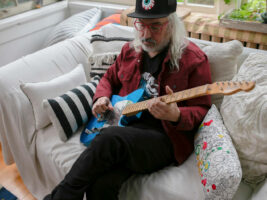 “I’ve tried the Fractal. I didn’t get it”: J Mascis on his new signature Fender Telecaster and why he’s sticking to tube amps

Picture J Mascis in your mind’s eye for a second. Wild, silver hair? Check. Thick-rimmed specs? Check. A t-shirt with some sort of garishly loud print on it? Yessir. An almost sarcastically huge wall of amps behind him? Double check. But what guitar is in his hand?

Chances are you’re picturing the Dinosaur Jr main man holding a Jazzmaster – after all the 55-year-old Massachusetts native was one of a select group of guitarists who helped make Leo Fender’s much-maligned offset a bona fide symbol of outsider grunge cool in the early 90s. Indeed, so heavily is Mascis associated with the instrument, he’s had no less than two signature Jazzmasters – a Purple sparkle Fender model in 2008 and a hugely popular Squier model that remains perhaps the coolest guitar in the budget brand’s catalogue.

So then, what on earth is the high priest of the Fender Offset doing bringing out that most un-Jazzmastery of instruments, a signature Telecaster? Well, in truth the Tele has always been there, behind the scenes, playing a very important role.
“I like what I play on it, y’know,” Mascis shrugs when we ask him what he likes about the Telecaster. “I use it for a lot of leads and stuff. If I play that guitar and then another guitar, I usually like what I played better on the Tele. I’m not sure how, but I think I play differently on every guitar I have.”

Load bearer
This signature Tele in particular is modelled closely on a guitar that’s very close to his heart – a 1958 top-loader model that he’s been using on record for decades, and with which he’s recorded most of Dinosaur Jr’s lead parts.
“​​​​That was the first Telecaster I had, so I didn’t know any different,” J explains of the guitar’s unusual stringing configuration, “But since then I notice that the strings are easier to bend than on other Teles. Also, people say that if it’s through the body, it sustains more, but I never thought of Tele for being known for its sustain or anything, so I don’t know what that’s all about…”

The new signature model emulates the guitar’s stringing method (with no string-thru option) and also sports a set of custom pickups modelled on the non-stock set that came with the guitar when he took ownership of it.
“When I bought the guitar, the guy told me he had put a ’56 pickup in the bridge,” Mascis recalls. “I don’t know why. I probably didn’t even know enough about guitars to know what he was talking about then. And it had jumbo frets on it, and it was refinished in this yellow kind of colour when I got it. Then I refinished it in the blue sparkle at some point in the 90s.”

That finish is another point of difference from your regular Tele recipe – with the iridescent charms of the guitar’s sparkle finish replicating that on the original, which was an unintended nod to Gretsch’s eye-catching Sparkle Jet guitars.
“When I first did it, I did it like a Gretsch,” he reveals. “I put drum covering on the front of the Tele just ‘cos I liked that colour from playing drums as a kid. But then at some point I had it finished by a guy that does motorcycles.”

Recent signature models from the likes of Jason Isbell and Brad Paisley have seen various levels of factory-aging make its way onto production guitars, and the Mascis Tele continues with that trend, albeit with one difference. The guitar’s maple neck has been relic’d quite heavily, but the body remains pristine – so what gives?
“That’s kind of my preference,” he affirms. “I don’t get the relic-ing thing on bodies, exactly. But I like it on necks, because I like old necks – I like the feel of them.”

Loud and proud
J Mascis plays loud – famously and notoriously loud in fact. His 1996 rig, which Guitar.com faithfully catalogued a few years back, featured a combined 710 watts of maxed out valve power to get his point across. Time might mellow many things, but anyone who’s seen Dinosaur Jr live in the last few years can attest that Mascis remains one of the few remaining exponents of massive walls of plugged in and cooking stacks.
“I guess I was really influenced by seeing the Woodstock movie,” he explains of his affinity for rigs that could turn you inside out if you got too close. “Y’know, I’d see all these stacks on stage, and I’d be like, ‘Well it sounded good then, why wouldn’t it sound good now?’ That was always my concept. And y’know, I liked the idea of the soundman just capturing your sound, rather than now, where it seems like the soundman creates the sound, which is a different vibe.

“I want the ‘hitting you in the back of the pants leg’ thing – I like to feel it y’know? If you can’t feel, it’s strange, because I’m really playing by hearing it – I’m not playing by memory and stuff. And like, if I can’t hear it, I can’t play.”
So it seems like there’s very little chance that Mascis will join the scores of rock ‘n’ roll veterans who’ve traded
“No, I’ve tried the Fractal,” he reveals. “We toured with Primus and he had a Fractal. I tried it and I was just like… ‘Uhh’ – I didn’t get it.”

Grunge outfit
It’s very nearly 30 years since Nirvana’s world-changing Nevermind pulled along a wave of disparate bands in its wake and made them global stars, including Dinosaur Jr. Three decades hence, we wonder how Mascis feels about the movement, and the perceptions and labels that went with the ‘grunge band’ tag.
“I’d single out Nirvana, rather than the whole of ‘grunge’, because a lot of things got lumped into grunge,” he reflects. “Like y’know, us and Sonic Youth and Nirvana were definitely in a certain scene. But then the stuff that they lumped into grunge wasn’t necessarily where we were at y’know? Like Alice in Chains – that was a totally different scene.

“But Nirvana I kinda take on their own, and everything after is kind of… I don’t know, I would call it something different, I guess. Also, when I hear grunge, I think of Mudhoney as like the epitome – that’s like the definition of grunge band to me. They were in our scene too. But just lumping other bands that were just from Seattle, that were more heavy metal bands, it just kind of veered a little bit off.
While the label might not always have fitted, however, the fraternity and friendship between the bands who emerged from the scene was real.

“I definitely felt part of a scene,” Mascis affirms. “We were all friendly with each other and I had kind of the same influences and I think we had the same kind of ideas about music. I guess I got into it from hardcore, y’know – I had pen pals in Canada and all over because, y’know, there was no one around here that liked the kind of music that I liked. So, it was kind of a continuation of that – finding people across the country who liked the same kind of music and were trying to make the same kind of music. So yeah, I definitely felt kinship with a lot of the bands.”
In 2021, Dinosaur Jr released Swept Into Space – the band’s 12th studio album was well received by fans and critics alike, but J Mascis is none the wiser. He doesn’t read reviews, and with no touring to distract him, he’s already on to the next thing.

“I finished a Heavy Blanket album, my second instrumental album,” he reveals. “I’m not THAT into instrumental music, for me it’s just a chance to stretch out and just solo to the point of bad taste y’know. I don’t know, it’s not a very commercial endeavour, it’s just a fun thing to do.”
Another fun thing for J to do is mess around with pedals. Long before mission control-style boards were de rigueur, Mascis was a pioneer of using pedals to manipulate his tone. Three decades on, the boutique effects boom has him like the proverbial kid in a multi-coloured candy story.

“Especially now there’s so many of them,” Mascis exclaims. “There’s so many of them now, it’s crazy. When I was starting, there wasn’t that much to choose from, and I didn’t have that much money, so I just used what was around. But I learned to play guitar and effects together as one thing, y’know – that was just part of my whole sound from the beginning. I never played direct into an amp or anything.”

Variety is a good thing of course, but we wonder if the limited options that a young Mascis had on hand forced him to be innovative – would being spoiled for choice have spoiled his creativity?
“I much prefer limitations,” he insists. “Like… to me, Spotify, I can’t handle. Because it’s like, you could listen to anything, so why listen to anything? When I was a kid, just finding the records, or mail ordering away for records was part of the fun, finding something that other people hadn’t heard. But now, you can hear anything, and it’s hard for me to figure it out. Like, I’m paralysed by the options, so I just don’t listen to any of it!”
For more information on the Fender J Mascis Telecaster, visit fender.com.
The post “I’ve tried the Fractal. I didn’t get it”: J Mascis on his new signature Fender Telecaster and why he’s sticking to tube amps appeared first on Guitar.com | All Things Guitar.