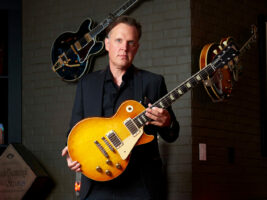 Joe Bonamassa has listed for auction his first NFT collection, including a ’59 Gibson Les Paul, ’63 Fender Vibroverb and a song tracked with those vintage treasures.

The guitar, amplifier and song – titled Broken Record – are the main draws of the 13-item non-fungible token collection, which you can now bid on through Heritage Auction until the end of the month (31 July).
According to Heritage, the NFT collection promises “the master and publishing rights” to the song. That means on top of listening to the song, its owner will even be able to license it for commercial purposes.
The ’59 Les Paul is said to be in “excellent condition” and is almost all-original: it’s had its tuner buttons replaced with reproduction Keystones. Aside from that, the guitar has some mild buckle wear on the back and “very minor dings and scuffs” on the finish. It comes with a Gruhn appraisal, paperwork and a letter from its original owner.
The ’63 Fender Vibroverb, another coveted piece of vintage kit, is a tube combo. It has two 10-inch speakers and transformers dating back to the early 60s. Its condition is also described as “excellent”.
Photo: Alex Crawford via Heritage Auctions
Other items in the collection include a video about Broken Record, “origin” videos for the guitar and amp, a digital photo book and more. The buyer will also get four meet-and-greet passes to one Joe Bonamassa show each calendar year.
“It’s basically like buying a one-song record company,” Bonamassa said of the auction in a statement. “I’m proud of the song whether three people hear it or 30 million hear it. It doesn’t matter. My approach would not have changed.”