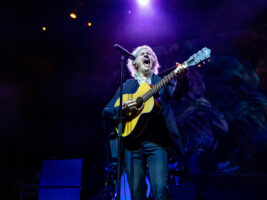 Joe Bonamassa makes it no secret that his main influences are classic blues artists. However, in a new interview he’s revealed the new, “up-and-coming” band that he champions as holding the torch for the classic rock attitude. No, not them.

READ MORE: Why does Greta Van Fleet’s music sound so much like Led Zeppelin?

In a new interview with radio station My Planet Rocks, Bonamassa was asked: “Is there anyone you listen to know, like, up-and-coming, that you think is inspiring or that you’re really championing?”
“I’ve always really liked the Rival Sons, I think they’re really a great band,” Bonamassa responded. “I just like what they do, I like their take on it. There are so many great up-and-coming bands right now that are really at the forefront of this next generation of blues and rock and this, kind of, hybrid of styles. I mean, the Rival Sons have always been at the top of the heap.”
Bonamassa also pointed to Rival Sons as an antidote to the “over-processed Pro Tools music” that’s prevalent at the moment (and, well, has been since Pro Tools was introduced). “I think bands like Rival Sons represent that new generation of bands that are just going, ‘Hey, we’re just gonna plug in and go.’”
Bonamassa’s implication that Rival Sons are “up-and-coming” is perhaps a little odd, as the band have released a total of six studio albums, and formed 13 years ago in 2009, following several other relatively successful projects from its members. Their second album, Pressure And Time, saw widespread critical acclaim for its successful reinterpretation of Led Zeppelin-esque bluesy hard rock.
In any case, Rival Sons deliver on their promise of a modern blues rock band heavily inspired by the sounds of the 60s and 70s, and they’ve clearly caught the attention of Bonamassa.
The post Joe Bonamassa names Rival Sons as his favourite “up-and-coming” band appeared first on Guitar.com | All Things Guitar.