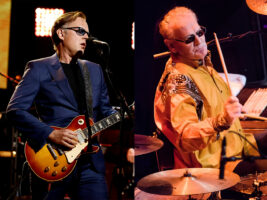 Joe Bonamassa has spoken about his experience recording with Ginger Baker for an acoustic album of Cream tunes that still hasn’t seen the light of day.

READ MORE: How to play blues like Joe Bonamassa

Back in 2019, Bonamassa, Bernie Marsden and Pete Brown sat in with the late drummer to lay down a version of Sunshine Of Your Love at Abbey Road Studio B.
“The whole thing started with a session that I did for a label,” Bonamassa told KLOS-FM on Tuesday (27 July). “They were making a record called Acoustic Cream, which I’m not even sure [is] out yet.”
According to Bonamassa, the infamously temperamental drummer nearly lost his cool when he started the drums to Sunshine Of Your Love – only to learn the tapes weren’t rolling yet.
“It was a studio session but we were certainly not ready to record yet. He sits down at the drums and he plays the opening fill to Sunshine of Your Love,” Bonamassa recalled. “He thought we were recording and threw the drumsticks down and then let off a few expletives, ‘Where are you guys? I thought we were recording this!’ and I’m like, ‘Oh boy, this is going to get interesting!’”
Bonamassa credited Marsden for easing tensions during the session. “By the end, [Baker] kind of warmed up to all of us,” he said. “Bernie Marsden was really the glue because [he] had befriended him, or at least, made multiple attempts to get him to calm down.”
As for whether Baker lived up to his reputation as a talent on the drums and a hot-head in the studio, Bonamassa had this to say: “He’s one of the greatest drummers of all time, he’s [a] Buddy Rich-level, John Bonham-level [drummer], but his personality was as advertised. That movie [Beware of Mr. Baker] was real. I can tell you it was real because I lived it for about six hours.”
Watch Baker and Marsden play Sweet Wine for one of the sessions for the acoustic Cream album:

The post Joe Bonamassa on recording with hot-headed Ginger Baker for unreleased Cream album: “His personality was as advertised“ appeared first on Guitar.com | All Things Guitar.