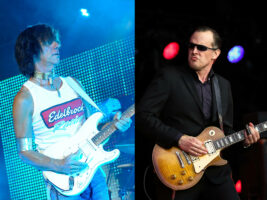 Joe Bonamassa on why Jeff Beck is still the world’s “best rock ’n’ roll guitar player”: “He figures out a new way to do something different with the guitar in every decade”

Joe Bonamassa is still floored by Jeff Beck’s playing, naming the 78-year-old the best rock ’n’ roll guitarist in the world – even today.

Bonamassa was speaking with New York’s WAXQ in a recent radio interview, where he was asked about guitarists who still consistently blow his mind.
“Every decade rolls over, he’s still the best rock n roll guitar player in the world and he figures out a new way to do something different with the guitar in every decade that he’s been active – 60s, 70s, 80s, 90s to now,” Bonamassa said.
Recalling some festival dates he played with Beck some “seven, eight years ago” Bonamassa shared the epiphany he came to being backstage with the legend himself.
“[Beck] would retreat into his dressing room and he’d take his guitar and plug it into his little practice amp – it was probably just some little battery-powered thing,” Bonamassa said. “And I should have been playing too because we had to go on before; I couldn’t even look at the guitar while I was listening to that.”
“It made you want to weep and you’re like ‘it’s him, it comes out of him, and it doesn’t matter if it’s a little practice amp, you just give him a guitar and he’ll figure out a way to get these sounds out of it, and that’s complete raw talent, it’s not the equipment, it’s just him.”
Bonamassa named two other players who were high up in his list, Eric Clapton and Eric Gales, the latter of which he praised for keeping a “youthful enthusiasm” towards his playing.
“Even though he’s a little bit older than me, he’s been playing just as long. It’s like he’s constantly searching for a little thing to change it, you know, which is great,” the guitarist said of Gales’ playing.

The post Joe Bonamassa on why Jeff Beck is still the world’s “best rock ’n’ roll guitar player”: “He figures out a new way to do something different with the guitar in every decade” appeared first on Guitar.com | All Things Guitar.