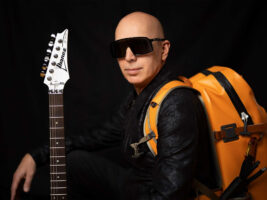 Joe Satriani has announced a new studio record, The Elephants Of Mars. The announcement has come alongside a video for the record’s first single, Sahara.

READ MORE: Joe Satriani: “Do you think I’m going to sacrifice somebody in the band and crew for rock ‘n’ roll? Come on”

The record is set to arrive on 8 April 2022, via earMUSIC. Satriani said in a press release that he challenged himself to create a “new standard” for instrumental guitar albums, as he explains: “I want to show people that an instrumental guitar album can contain far more creative and entertaining elements than I think people are using right now.”
The album was recorded with Satriani’s band remotely, when the pandemic nixed his touring plans and forced him to take a “workingman’s holiday.” According to Satriani, this environment removed all of the time constraints from the project: “We did everything. We tried the craziest ideas. And we entertained every notion we had about turning something backwards, upside down, seeing what could happen,” he said.
See the music video for Sahara below.