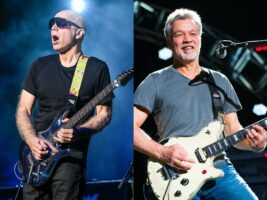 Joe Satriani no longer wants any part in a Van Halen Tribute: “Whoever tries to do it is gonna get a whole lot of negativity”

Joe Satriani has explained why wants to play no role in a Van Halen tribute and admitted that he believes Wolfgang Van Halen is the only person who should decide whether an event takes place.

Over the past few months, countless rumours have circulated regarding the possibility of a tribute concert for Eddie Van Halen. Now, following Wolfgang’s comments that claimed the surviving members are “too dysfunctional” to organise the event, Joe Satriani has also weighed in on the debate.
Speaking to Ultimate Classic Rock, Satriani stated that seeing Wolfgang perform at the Taylor Hawkins tributes earlier this year made him realise that it wouldn’t be right for him to perform at any future Van Halen performances.
“It was the most natural, beautiful thing I’d seen in a long time,” he says. “It was such a wonderful thing to see him play his dad’s music like that… I thought, ‘Well, if the thing is ever gonna happen, he should do it.’ It just seemed more natural than reaching out to somebody like me.’
These comments come following the guitarist’s initial agreement to fill the role after being asked by Alex Van Halen and David Lee Roth previously.
“[When they called,] I jokingly told them [that] if I had half a brain I’d hang up right away and not accept such a crazy offer, ’cause nobody can replace Eddie, and whoever tries to do it is gonna get a whole lot of negativity from the world of social media,” he admits. “But I heard myself saying ‘yes’ before my better judgment kicked in… because I am such a fan of Eddie and his work.”
Alongside wanting to avoid any backlash, the guitarist also insists that he wants to stay out of the equation so he can alleviate some of the pressure Wolfgang is facing to arrange an event.
“Everyone’s got their own idea about how to do it best, and I’m staying out of that,” he affirms. “We should leave him alone, let him figure out the best time and place for it. Whatever he comes up with will be the best way to do it.”
The post Joe Satriani no longer wants any part in a Van Halen Tribute: “Whoever tries to do it is gonna get a whole lot of negativity” appeared first on Guitar.com | All Things Guitar.