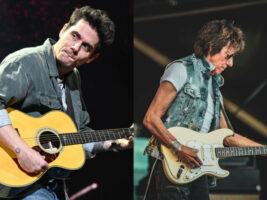 John Mayer explains why Jeff Beck was the ‘guitarist’s guitarist’

READ MORE: Paul McCartney’s heartfelt tribute to Jeff Beck: “His unique style of playing was something that no one could match”

In the now-expired Instagram Story, Mayer wrote, “I think what made Jeff Beck such a ‘guitar player’s guitar player’ was that to those who didn’t play the instrument, all of it looks perplexing. But to those who play, it was just so obvious to the facility and the creativity he possessed that nobody else had.”
“Guitarists are excellent at tracking what other players are doing. You just couldn’t track Jeff Beck. All you could do was sit back and listen in awe, as if you’d never touched a guitar in your life.”
Image: John Mayer via Instagram
Beck first earned the moniker “the guitarist’s guitarist” during his Blow By Blow era, which saw him reach number 4 on the charts and eventually went platinum in 1975. Despite not reaching the heights of fame that peers like Eric Clapton and Jimmy Page reached, those in the know held him in the highest regard as a musician who pushed the guitar forward both technically and creatively.
Beck passed away on 10 January 2023 from meningitis, having suddenly contracted the illness following a productive year of touring where he even released an album together with actor Johnny Depp titled 18. His family, who have described his passing as peaceful, have asked for privacy in this trying time.
Beck rose to prominence with 60s blues-rock trailblazers The Yardbirds, after replacing Eric Clapton as their lead guitarist in 1965.  Jimmy Page, Eric Clapton, Ronnie Wood, David Gilmour, Joe Bonamassa and many more have since shared their tributes to the guitarist.
The post John Mayer explains why Jeff Beck was the ‘guitarist’s guitarist’ appeared first on Guitar.com | All Things Guitar.